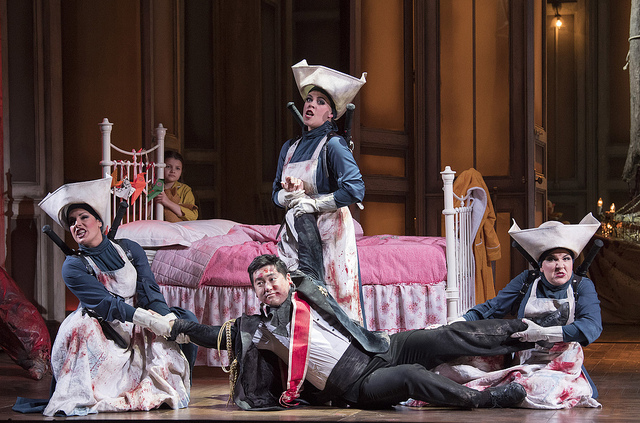 Opera North’s Magic Flute ‘It’s a bit like a mash-up of The Handmaid’s Tale, Black Mirror and Dr Who’

James Brining can usually be found in the director’s chair at the Leeds Playhouse where he’s been Artistic Director for the last six years. This month, however, sees him take the plunge into the world of opera, directing The Magic Flute in a brand-new production for Opera North.

Having previously worked with Welsh National Opera on Sondheim’s Sweeney Todd and with Opera North on Into the Woods at Leeds Playhouse, Brining is no stranger to producing musicals with opera companies. But what was it like to direct his first opera?

James: “Opera presents different challenges to theatre as the music is the heartbeat of the piece and guides you to what’s important and what a character’s emotional state is at any given time. Of course, it also means working with a conductor at every rehearsal which I’m really enjoying.”

Q: With an opera written in the 18th century, one of the challenges must be to make it relevant for modern audiences. How do you approach that?

James: “I want The Magic Flute to be a piece about now, rather than a piece about a world that we’re not part of any more. A great human truth lies at the heart of this opera. The Priest of the Sun and the Queen of the Night illustrate two different ways of being in the world: they’re in conflict with each other, but neither is a bad person in their own heads. There is also the contrast of day with night, man with woman, high musical notes with low. The whole thing feels timely in the way it mirrors the extremes in today’s world and the need to find a third way between opposing points of view.”

Q: So would you say the themes still resonate today?

James: “Yes. Friendship, what love means, religion and how a religious community can be a benign place when you’re in it and hostile to those wanting to leave. It’s about the individual questioning society, leading to self-development and self-discovery. It’s also about freedom and what people want – and what they need – to be happy.”

Q: What for you makes opera different?

“The heightened emotions of the opera make naturalism more difficult. As a theatre director, I wanted to ensure there was a clear narrative arc with one thing naturally leading into another. It’s important that the audience remains emotionally engaged and understands the characters and the journeys they go on.”

Q: Is it easy to understand if you’ve never been to an opera before?

James: “Yes. It is sung in English and includes some intriguing contemporary references. The way we’ve approached it, it’s a bit like a mash-up of The Handmaid’s Tale, Black Mirror and Dr Who.

“The production also makes imaginative use of projections to blur the lines between reality and fantasy, with some of the more unusual props including inflatable octopus tentacles.”

Q: And what about the characters?

James: “I’m interested in the psychological impulses behind the characters’ actions. This is a work which manages to be both dark and joyous with people finding themselves in some very vulnerable positions throughout. I’ve also introduced an additional cast of children because I think the piece asks us to consider the world from a child’s perspective, to see it through their eyes.”

Q: The Magic Flute contains some of Mozart’s most sublime music including the Queen of the Night’s aria, an instantly recognisable tune which is one of the most difficult operatic pieces for a soprano to sing. Do you think there is something magical about the Magic Flute?

James: “I’m certain the name of the opera was deliberately chosen by Mozart to underline his belief in the power of music and the transforming role culture can play in people’s lives. The desire for creativity makes basic physical sense, and to me that’s what we’re celebrating in our own creative act, that act of performance in a theatre in Leeds 200 years after the original.”

Marvellous Machines and the Charm of Chitty Bang Bang