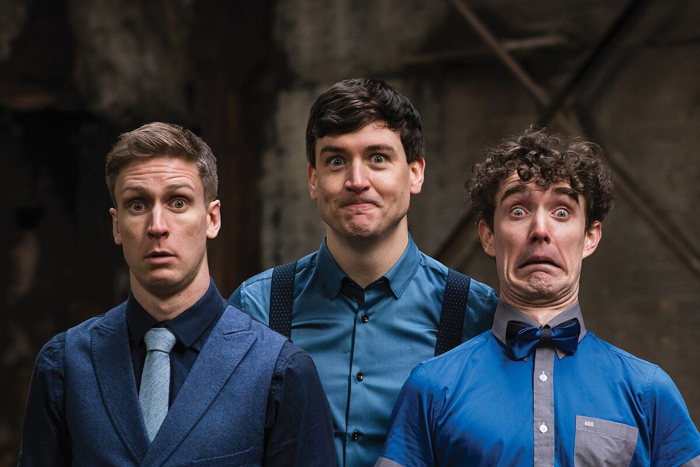 YouTube comedy favourites, Foil Arms & Hog met at University College Dublin while studying architecture, engineering and genetics. Then the financial crash led them to pursue the noble art of being downright silly. And it’s paying off.

Quays Life chats to the Irish trio ahead of their new live show, Craicling.

“We put fishing nets on our heads which totally distorts the face and then we go from there.” As the Irish sketch trio of Foil, Arms & Hog prepare for a national tour of their Craicling show, Sean Finegan (dubbed Foil as he is often the straight man who sets things up) is trying to explain the appeal of an older routine that will be performed live over the coming months. “It’s called The Net People and as I talk about it, I’m thinking that I shouldn’t because it doesn’t sound funny at all. But the people beg to differ. They’ve been asking for it for years and it seems to go down a treat.”

Craicling will take the form of their newest material in the opening half and a selection of their greatest hits in part two. “When we look back at our older sketches, we tend to be like ‘what were we thinking?’ So, we’ll maybe tweak here and there and try for a better laugh at certain points. We’ve done that with other sketches that will appear in the second half; I don’t know why, but The Net People has remained intact.”

With little TV exposure behind them, Foil, Arms & Hog have gathered a huge fanbase thanks in part to their success on YouTube. Their channel has over 230,000 subscribers and with a new sketch going up every Thursday, the team have a set deadline which forces them to keep coming up with fresh material.

“We’re realising that even without telly, we can play places like Australia, the Netherlands, and South America”.

“There’s no money in the YouTube channel,’ insists Sean. ‘In fact, we’re losing money on it to make the sketches, but we do it to get people to the shows. We did really want to do telly at one point, but in the last couple of years the live tickets have been selling really well. We’re just seeing the number rise and that’s all we really want to do now. With previous projects it took so much effort to come up with a pilot and a script and we’re realising that even without telly, we can play places like Australia, the Netherlands, and South America. Having said that if the BBC came to us with a blank cheque book and said: ‘Do this’, of course we would jump at it. But we’re not pursuing it the way we did in the past. With YouTube we can do what we want and we can develop our own style there.”

“All three of us are different and that’s a good thing when it comes down to how we write,” insists Sean. “So you get three different senses of humour coming at a joke and if it gets past the senate then it’s a good joke. And a good joke will override everything. In terms of where we draw inspiration, Lee Evans was a massive thing for Hog, Jim Carrey was huge for Arms, and I like wordplay stuff. Me and Arms both like The Marx Brothers but Hog hates them. I always wonder about a stand-up writing their own material because they’re just bouncing it off themselves, so it’s very hard to be self-critical. But there’s a real benefit there when you have three people.”

Despite the three lads forming different comedic perspectives, the rumours are that they are yet to have a single cross word in the decade and more that they’ve been a group. It’s a surprising fact that Sean is only too happy to confirm. “There’s no angry debate. Someone will say ‘I think that’s really funny’ and someone else will say ‘nah, it’s not funny’ and that’s that. We don’t try to take aim at anybody or be hurtful with the comedy, it’s quite good-spirited. There is one sketch in the show now about two bouncers who go on a blind date and they meet an ex. Hog plays the ex-boyfriend and his body is covered in stamps from the nightclub. He had put a few on his arse as well depending on how far we wanted to go with it on the night. But eventually he said that didn’t want to go around for half a year covered in remnants of stamps that you can’t wash off. So, we all had a chat about that. But no, there are no fights.”

This camaraderie and genuine friendship among the trio has no doubt been entrenched from the fact that they met up and first performed while at college. While comedy wasn’t initially seen as a means of earning a living, that changed when the global recession hit in 2008. “When we finished college we were possibly among the few people who were delighted about the economy: there were literally no jobs. It was the perfect opportunity to try the comedy thing full-time in a guilt-free way. Had I come out of college at the height of the boom, a job would have been there on a plate. But there weren’t any so we thought we might as well do comedy. So yeah, the recession was great.”

As Foil, Arms & Hog get set to play in front of large numbers across the UK and Ireland over the coming months, it’s clear that for them, the good times just keep on coming.

Foil, Arms & Hog are at The Apollo, Manchester on 16 March 2019. See website for full tour details.