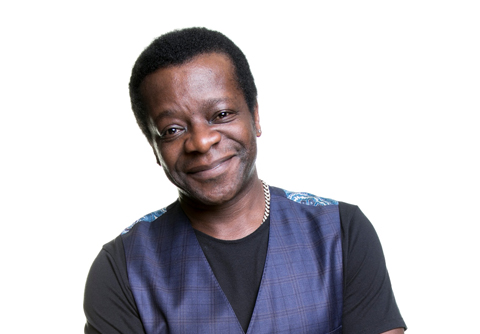 Stephen K Amos on finding laughter in the extremes of life

In Bouquets and Brickbats, comedian Stephen K Amos looks at life as a two-sided coin and finds something to smile about whichever way it lands. He talks to Brian Donaldson about the extremes of politics, personal loss, and the positive boost he gets from his fans.

Not for nothing is Stephen K Amos known as a feelgood comedian. His years of touring the nation with crowd-pleasing shows have helped him build up a loyal fanbase who expect an evening of non-stop laughter. With his new show Bouquets and Brickbats, Stephen is promising the usual quota of gags and funny stories, but this time around he’s being a little more contemplative about the universe.

“I picked that title because the last 18 months have been awful both personally for me and in the whole world at large. Some things are so joyful and joyous on one hand, and on the other, so devastating. So I was trying to find a way of saying that some days are rosy and other days are downright shitty.”

Across 2017 and 2018, Stephen has lost both his mother and his twin sister, and working through this sadness has given his comedy a different perspective. “I never thought I could do something like this, as my whole thing has been to keep them laughing and not to hold the silence. But I’ve now found out that it’s more powerful to hold the silence. That whole thing about losing people and death is a bit in the show and there’s a silence in the room where you can hear a penny drop. For me, that is a bit weird.”

As he has proved for many years now through touring shows such as The Spokesman and World Famous, on his Royal Television Society Award-winning Channel 4 documentary Batty Man, and in radio programmes such as What Does The K Stand For?, Stephen is a potent social commentator as well as a highly popular stand-up. You can rest assured that he will be looking to tap into the issues of the day during this tour, albeit in his own distinctive style. “I don’t want people to sigh when I mention the likes of Trump and Brexit, but I try to tackle them by using another example of something just as ridiculous. But I don’t mention any names and will try to do it in a subtle way. At the start of the tour, I start off with a script but it will undoubtedly change depending on world events and my own mood. Things are constantly happening.”

One thing that he most certainly won’t be doing is shouting down the opinions of anyone in his audience. He knows full well that in this divided nation, there will be people coming to his shows who will have voted differently in the EU referendum and he is more than willing to hear both sides of the debate. Not all current comedians are of that mind, though.

“I was doing a late-night show in Edinburgh with a mixed line-up and a very well-respected comic just slammed down a woman who admitted that she had voted for Brexit. I thought that wasn’t very fair because people are entitled to their own opinions and instead of tackling this in a creative way you’ve just slagged her off and made sure that she will never admit to anything like that again in any situation. I think we should be able to sit down and discuss things like adults; when it descends into abuse, you’ve lost the argument.”

In this fractured world, how does Stephen stay positive? “I get my positivity from human beings. Something good happens on a daily basis: a text from someone, a stranger doing something nice for you on the street or someone just saying something positive. We all have a story to tell; you might see a façade but you never know what’s going on inside a person. Sometimes people have come up to me after this show with tears in their eyes or wearing a badge for Breast Cancer or something and it’s about being touched by other people’s stories. I haven’t really had time to stop and take stock and think. It’s all about going out there and listening to people’s laughter or their reactions to what I’m saying. At one show, one lad felt confident at being out and proud at the age of 15, something I couldn’t have done: those moments make it all worthwhile.”

As well as making people laugh in the live arena, you can hear him being funny with his own podcast, The Stephen K Amos Talk Show, the first series of which came out on Audible in August and reached number one in Australia. A second series should be available sometime during the tour. Meanwhile, he has plans to spend a few months working in the US during 2019. “I think this is the right time to go to America as Brits are doing very well out there; the likes of James Corden, John Oliver, Gina Yashere and Idris Elba.”

For now, though, Stephen is very much looking forward to taking to the nation’s roads and getting out and about to meet his public. “I love touring and I’m very grateful that people still want to come out and see me because I don’t do that much on TV these days. I try to mix it up and go to venues and cities and towns that I haven’t been to before or I’ll go back to places and play bigger venues. Travelling around does give you an idea of the mood of the nation. Live comedy is thriving and people are coming out to see lots of different kinds of comedy and it’s great that people are prepared to listen to a person on stage saying whatever they like. That’s one of the beautiful things about this job. Unlike television or radio or newspaper print, I can literally say whatever I want.”

Stephen K Amos brings his UK tour of Bouquets and Brickbats to The Lowry, Salford Quays on 2 December 2018. For full details of the tour visit www.stephenkamos.com