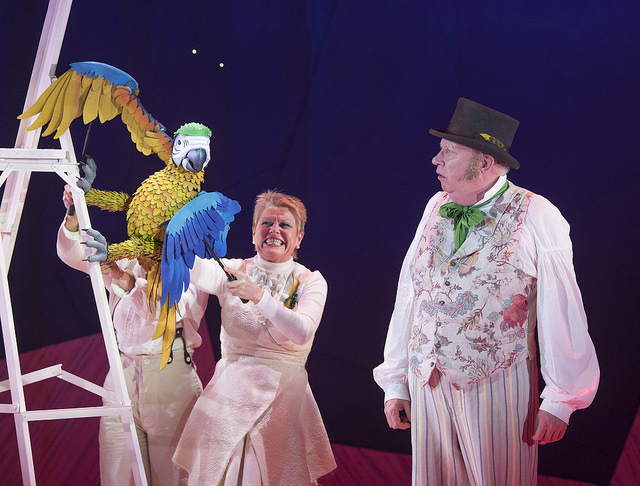 Carmel Thomason5 min readNovember 25, 2018
Home » People » Vicky Entwistle on playing a parrot in Doctor Dolittle The Musical at The Lowry

She may be playing a parrot, but former Corrie star, Vicky Entwistle won’t be winging it when it comes to performing in the newly updated 50th anniversary revival of the classic musical Doctor Dolittle.

Arguably one of soaps loudest and lairiest ladies, while she may still be ‘squawking’ in her latest role, there will be no further trace of Corrie’s Janice Battersby when Vicky plays the parrot who teaches Doctor Dolittle the language of the animal kingdom.

Marking the 50th anniversary of the 1967 film of Doctor Dolittle, with book, music and lyrics by double Academy Award-winner, Leslie Bricusse, the production features the same much-loved songs, including the Academy Award-winning Talk to the Animals.

Featuring stunning visual puppetry, and with the book reworked by Leslie Bricusse, it’s easy to see why theatres all over the country have been so eager to book a slice of the Dolittle action – enough venues to fill a whole year.

Signed up to appear for the duration, Vicky admits that having her carpenter husband, Andy, working alongside her makes the prospect of 12 months living out of a suitcase much easier to contemplate.

“He is a carpenter and helps to build our set,” she explains, “I wanted to do the full year was to see all these places that I have never been to before. When I am seventy I want to be able to say ‘Oh, I played that theatre!’ So yes; we’ll be going round churches and cathedrals and attractions and doing lots of walking. We like to have a good old nose around. It’s going to be fun.”

“I am really looking forward to playing The Lowry, which of course is close to all my old Corrie friends. Blackpool is close to home and anywhere up North means we will see family and friends.”

Vicky is no stranger to musicals having played Madame Thénardier in the West End production of Les Misérables. Yet, modestly she insists she’s no expert.

“I also thought that, by doing the whole year, I could learn more. In fact, when they asked me to do this I asked my hubby what was going on!”

The show tells the story of the eccentric Doctor Dolittle who sets off to track down the Giant Pink Sea Snail – the creature that holds the secret of life and makes the world a happier place. Helped by his human companions and an exotic menagerie of animal friends, including the pushmi-pullyu and trusty sidekick ,Polynesia the parrot, the Doctor teaches us not only to talk to the animals, but also the value of listening to them.

“Polly is very old, very wise and extremely funny,” says Vicky, “She’s also quite cheeky. She is the only animal that can speak [human and all the animal languages] and Doctor Dolittle is quite taken aback when he first realises. He thinks he is the clever one, but really Polly is always giving him clues and leading him in the right direction.

“They are just the most amazing costumes. Without giving too much away, mine kind of melts into the puppetry.

“To be a character and to sing, dance and do puppetry? I thought my head was going to explode. By the end of the first week of rehearsals, I was convinced that whenever I heard birds tweeting that they were talking to me!”

Vicky admits to being initially been a tad in awe of the musical’s creator, Leslie Bricusse, who is a double Oscar and Grammy winner, and has no less than eight Ivor Novello Awards to his name. Bricusse, who has written more than 40 musical films and plays and songs, including the blockbusters Scrooge, Willy Wonka and the Chocolate Factory, Goodbye, Mr Chips, Superman, Victor/Victoria, Home Alone 1 & 2, Hook, Goldfinger and You Only Live Twice, was sitting in on rehersals, and Vicky says having familiar faces in the cast helped her initial nerves.

“I had my two pals,” she smiles, “I worked with Mark on Father Brown and with Brian on Corrie, which really helped.”

Having overcome her wobbles at being in the presence of a musical genius, Vicky fell in love with the revised story, and its resonance in today’s throw-away society.

“It is so relevant and the message is clear: you get back what you give out. It is about loving animals and the environment; a sweet message of compassion and thoughtfulness. It is very much a show for all the family and it is very funny. It has got something for everyone and it looks stunning too. I think People are going to love it.

“I want audiences to leave the theatre feeling really elated, humming the tunes and feeling alive. I want them to understand the moral and for children especially to think about the environment and the animals. I am very much an animal person. Animals are ace.”

From what I hear, so too is the show. A word to the wise: grab tickets now. I suspect they’re selling faster than a sprinting cheetah.