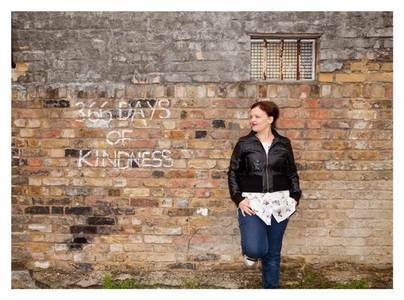 Is it possible to change the world just by being kind? That is the question Bernadette Russell asks in this quirky, funny and heart-warming show. It’s not an original premise, as she readily admits, but then again the world can never have too much kindness.

Indeed, there didn’t appear to be much kindness around at all when Bernadette began her crusade in 2011. I say crusade because at times she has forced her kind acts on people, whether they’ve wanted it or not – which, as she recognises, is not very kind.

This in-your-face kindness was Bernadette’s response to the in-your-face violence of the 2011 UK riots. Faced with the overwhelming problems of the world she asks, what can I do to make a difference? She decides to be kind to a stranger every day for a year and this show is about her experiences as a result.

To tell the story, she takes to the stage with her partner, Gareth Brierley, who provides the voices and props for an array of characters she meets during the year. He also works the films and images projected on a screen at the back of the stage, which he partly expresses through frenetic, contemporary dance. It’s a good pairing that develops the idea from what could have been simply stand-up comedy to a fuller theatrical experience.

During the year Bernadette buys flowers for strangers, dresses phone boxes as magic boxes, hands out sweets, gives away books and sends numerous well-wishing cards. She once opened her loo to the public during the London Marathon, but in hindsight reveals that wasn’t her best idea.

The outcome is a personal journey as much as a comment on society. Bernadette is a brash comedienne who wears bright red lipstick and does crazy things without thinking. As a child she ate a goldfish, gave her sister pee to drink, and kicked a boy because he looked like Simon le Bon. Her immediate response to violence was an angry, forceful kindness, but by the end of the year it moves into something softer. In 366 Days of Kindness, she has created something both thought-provoking and laugh-out-loud funny. By giving away a lottery ticket at each show, she might also have created a millionaire – although she takes the recipient’s photo along with the numbers so she’ll know where to find them if she has.