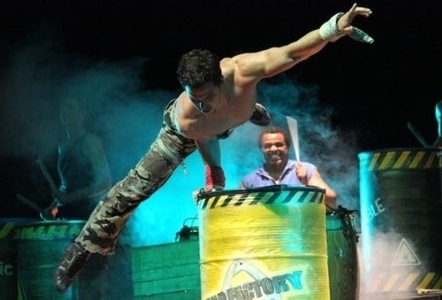 When I think of tap dancing, I picture Fred Astaire, Gene Kelly, smart suits, romance, maybe top hats and a cane. Apparently, tap dancing has come a long way since then. And in Tap Factory there is none of the usual gloss of American entertainment. Here tap is a dance of the streets. It’s raw, fast, heavy, noisy and testosterone fuelled.

This new style tap is more akin to the Power Tapping popularised by Savion Glover in the late 90s and brings the art form back to its multi-cultural roots. Tap grew out of European and African traditional dance forms which were fused to create an American Tap hybrid. The modern twist of Tap Factory sees it evolve again mixing hip hop, acrobatics and street dance.

The result is a high energy movement that creates its own music, in which the beat is everything. The staging is equally stark, an industrial backcloth behind a steel scaffold constructed to house six drumming stations. In line with the idea of making music with whatever comes to hand, five of the men thump out a rhythm on what look like big oil drums. Only Raul Hernandez of electro-Latino band P18 gets his own traditional drum kit and bongo drums, although we also see him use his sticks on anything that will make a noise including, a step ladder, tap shoes and wooden chairs. Music is created from anything and everything, be it an empty drink can or a pile of sand. The inventiveness is incredible, none more so than when Vincent Pausanias strikes a tune from a make-shift double bass he’s cobbled together from an oil drum, sweeping brush and piece of rope.

The costumes are pared back to match the industrial themed set. The dancers, including two world champions, Gilles Guenat and Dorel Surbeck, are dressed in either workmen’s vest and dungarees or army combats. There are a lot of bare chests, and the rippling physiques on display are as much a part of the show.

There is a risk that tapping and drumming becomes a bit monotonous after two hours or so. To break it up Jérémie Champagne injects lightness with his clowning and Pausanias does a brilliant job of getting the audience involved in creating rhythms with their hands.Tarek Rammo shows impressive strength and fluidity both using the scaffold as an anchor and on the corde lisse. Andrea Catozzi, also adds an element of circus, jumping across the stage on his hands and spinning multiple cartwheels on the spot.

At Manchester Opera House the show attracted a mixed audience from families with young children to hen parties, and its wide appeal was evident in the spontaneous standing ovation at the end.

Tap Factory was at the Opera House, Manchester on 15 March 2014.