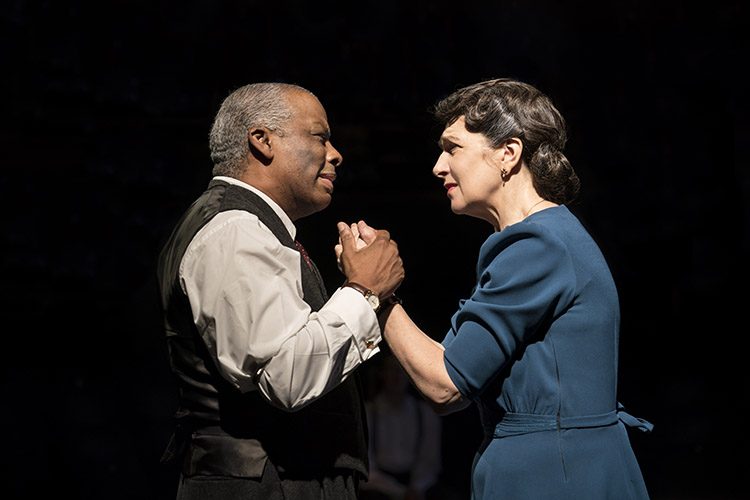 Death of a Salesman review

Arthur Miller’s 1949 Pulitzer Prize winning play, Death of a Salesman is a great play because, like Shakespeare, it captured something universal in the human condition. When staged 70 years later it still feels piercingly relevant, but sadly this is not only in its depiction of human relationships but most poignantly in its portrayal of male mental health and suicide.

Sarah Frankcom’s production, starring Don Warrington as the disillusioned, Willy Loman, doesn’t sit neatly in any timeframe. The costumes place the characters in 1950s America, but the largely bare staging, overshadowed by a full tree canopy also give it a dream-like atmosphere.

In many ways what we are watching is a dream of sorts. Miller’s original title for the play was, ‘Inside of his Head’, and for much of the action that’s what we are seeing, as Loman revisits his past in an attempt to make sense of his present.

Here the Royal Exchange’s in-the-round set up works particularly well. Designer, Leslie Travers has removed the banquettes to surround the stage with a low-seated ring, from which the various characters in Lomas’ life look on like shadows.

As the title suggests, the story follows a salesman in the last days of his life, and this heaviness envelopes the production from the start. At the centre is the complex Lomas, who after more than 30 years with the same firm is travelling hundreds of miles a day, busting a gut on a commission only contract, and borrowing money to keep up a lifestyle he can no longer afford.

The ideas of an older generation feeling discarded in the workplace; a younger generation seemingly refusing to grow-up, and the harshness of a capitalist society which holds no value for loyalty are all as relevant today as they were when Miller first envisioned his characters.

In a compelling performance, Warrington embodies the weariness of Loman, while also offering striking glimpses of the man he once was, or at least once believed himself to be. As we learn through the play, everyone has different sides, and even those closest to us don’t recognise them all.

Maureen Beattie is equally convincing as his burdened wife, Linda, who is doing everything she can to desperately hold the family and her husband’s mind together.
There is hope but it feels misplaced. Their two sons: argumentative, Biff (Ashley Zhangazha) and philanderer, Happy (Buom Tihngang) don’t have the answers or the lives they hoped.

This intricate web of family, society and psychology, requires a lot of talent to hold it together, and the whole cast is to be commended. The result is a gripping, if sobering, three-and-a-quarter hours that will stay with you for much longer.

Death of a Salesman is at The Royal Exchange Theatre, Manchester from 11 October – 17 November 2018.