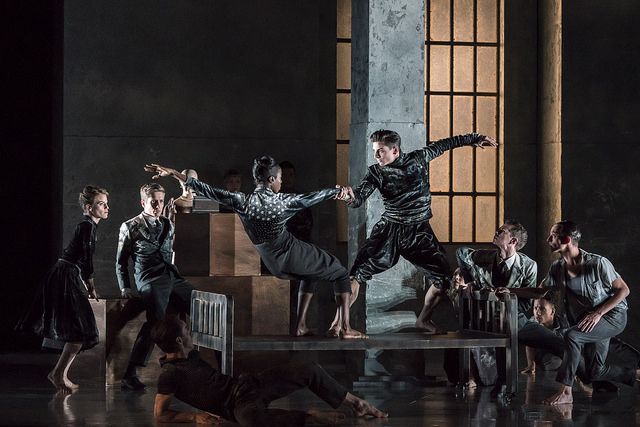 Life is a Dream review

Life is a Dream is a departure from the Rambert’s usual touring programme of three pieces, often including at the Lowry a premiered work.

This season the contemporary dance company brings its first full-length narrative dance work in almost 40 years. In all aspects – choreography, costumes, music, design – it is an ambitious exploration of the artistic imagination.

The two-act piece, takes inspiration from Pedro Calderón de la Barca’s 17th century play of the same name. The original play tells the story of Prince Segismundo who after a lifetime of incarceration escapes the prison confines for one day. On discovering everything he’s never had, the Prince is overwhelmed with negative emotions of greed, resentment and anger. He goes on a rampage of violence before being captured, sedated and re-imprisoned. On waking he’s told his experiences were all a dream and begins to wonder what is real and what is illusion.

With similarities to the biography of the Buddha, the Prince comes to realise that everything he longs for is to be found within himself. When given a second chance of freedom he approaches his release this time with appreciation and wonder.
In Rambert’s version, two-time Olivier award-winning choreographer, Kim Brandstrup mixes elements of the story with the isolation and repression of Eastern European artists during the Cold War.

Here the Prince becomes a theatre director, although if you haven’t read the synopsis he could just as easily be a writer or any artist working to create something from within. We meet him seated at a desk on which a single lamp shines most of the light. Slumping forward he drifts off to sleep, and images from the day’s rehearsals are replayed by the company dancers as if in a dream.

Costume Designer, Holly Waddington has used X-ray images of ancient costumes from the V&A museum as a basis for some of the prints. These are combined with styles from both the 17th century and 1950s, taking commonalities such as the scooped necklines, to create a sense of blurring time. The effect is an ethereal quality that almost camouflages the dancers against the muted grey/green back-drop of the Quay Brothers’ set design. On top of this are projected monochrome glimpses of the outside world – open land and seascapes; trees and windswept grasses.

Performed to a haunting score from Polish composer, Witold Lutosławski, all elements combine successfully to create a dream-like experience. Yet, while this works as an immersive artistic exploration it doesn’t draw in the audience in quite the same way.

The dancing is as technically brilliant and beautiful as ever, but aside from the solo and duet dances in the second act, there is often no clear focus to which the audience’s attention is drawn. The second act is also not distinctly drawn from the first, and the dream-like state the whole piece induces didn’t so much draw me into its world as create a pleasant backdrop to retreat into my own day-dreaming.

Read our interview with Kim Brandstrup and Holly Waddington.