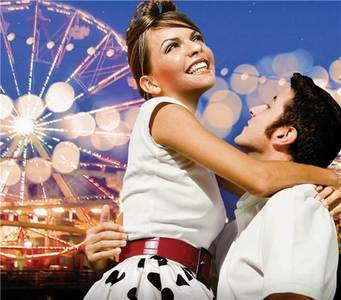 The music of the late 1950s and early 1960s has come to hold a nostalgic innocence, even for those, like myself, who weren’t around to enjoy it at the time.
Many of the hits from that era have proved to be timeless classics, and continue to sell in the Dreamboats and Petticoats compilation albums.

It was out of the success of these albums that the musical was born, and, like many of the musicals that have been pieced together around popular songs, the story is a bit weak and predictable. However, what the show lacks in substance it makes up for in wit, heart and sheer energy.

Penned by Laurence Marks and Maurice Gran, the team behind Goodnight Sweetheart and Birds of a Feather, the dialogue zips along with some genuine laugh out loud moments.
We’re back in high school, 1961, and goofy kid Bobby (David Ribi) is wishing he could trade his youth club table tennis championship for pop stardom. Then he’d have his pick of girls. For, as he muses to his Roy Orbison poster, Chubby Checker is fat and can pull any girl he wants.

Yet from the moment Bobby bursts on the stage singing Let’s Dance, we know that this isn’t going to be an easy journey. His voice may be soaring, but he clearly isn’t hitting the right note in his school uniform. In contrast, Norman (Ben James-Ellis) struts on stage wearing a leather jacket and jeans and has all the girls swooning to his rendition of The Wanderer. So, the scene is set for teenage rivalry, unrequited love and all the emotions that pop songs are made for.

They are supported by a likable and talented cast. Samantha Dorrance brings a touching charm to girly swot Laura and recent graduate Josh Little shines in the role of Bobby’s best mate, Ray.

With more than 40 hit singles over two acts, Dreamboats and Petticoats plays on our affection for a trip down memory lane, pressing all the right feel good buttons.