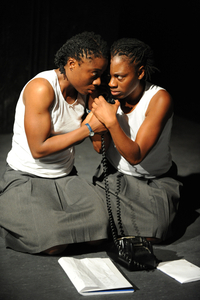 The saying that truth is stranger than fiction was never clearer than in Linda Brogan and Polly Teale’s play, Speechless. Inspired by Marjorie Wallace’s best-selling book ‘The Silent Twins’, it tells the true story of sisters, Jennifer and June Gibbons who spoke only to each other, talking in a secret language they’d devised to shelter themselves from the outside world.

Although refusing to speak, the girls find other ways to communicate, tapping away on a typewriter until the early hours and at one point it appears hopeful that their voices will be heard. However, it is the physical expression of their emotions through sex and violence which are to be their downfall, leading them to Broadmoor where the play begins.

The production won a Fringe First Award at Edinburgh in 2010 and has much to commend it. There are compelling performances by Natasha Gordon and Demi Oyediran as the troubled twins, and Naomi Dawson’s set design captures the many prisons, both real and metaphorical in the story.

We sense the girl’s vulnerability, the mother’s incomprehension and the psychiatrist’s frustration at the twins’ situation. However, at times it is confusing and the final emotional punch falls short of the full tragic impact of what unfolded. Perhaps with a story as upsetting as this, that was just as well.