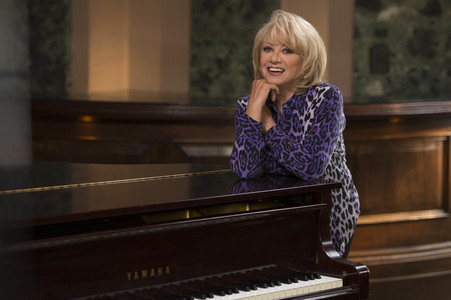 She may be a diminutive 4 feet 11 inches, but when she steps onto the stage Elaine Paige is every inch the star.

This series of concerts may be Stripped Back in many ways, but there is certainly no shortage of glamour. Wearing a stunning knee-length, silver/blue, sequinned fringe dress designed by Jacques Azagury, Ms Paige makes a shimmering entrance.

The evening is all about reflecting and reminiscing, but unfortunately her opening banter falls flat when her comment about the BBC Breakfast move from Shepherd’s Bush to Media City comes out more like a slight on the area.

Still, Elaine Paige is our country’s musical superstar, so while the audience isn’t willing to indulge her with feigned laugher or false applause, it is quick to forgive a fumbled start.

The evening is one of a 23 date series of concerts, in which Ms Paige has decided to do something completely different. Supported by an accomplished five-piece band, led by Musical Director John G Smith with whom she’s worked closely for the past decade, she revisits the music of her youth, singing popular songs mainly from the 1960s and 70s, celebrating songwriters such as Harry Nilsson, Randy Newman, Jim Webb, Burt Bacharach, and Lennon & McCartney.

These songs hold strong memories for much of the audience too, and in this sense the evening is a huge trip down memory lane. Jamming alongside guitarist Zoltan Dekany to Bread’s Guitar Man, we see a new side to Elaine Paige. She is clearly enjoying herself and she still has a strength of voice that can turn itself to any tune.

However, there is a tangible lift in audience energy when she sings, I Know Him So Well – the song from Chess which won her four weeks at number one as a duet with Barbara Dixon. She has spent more than 50 years singing this kind of music, so you can understand that at 68-years-old she might want a change. But if something has worked for you for over half a century, why spoil a good thing?

It’s not that our musical heroine delivered something different from what she said she would. And she did throw in a couple of musical favourites fans expect to hear. Yet the atmosphere in the room when she sang a musical theatre number, gave the sense that her fans were willing to indulge her the rest for the pleasure of hearing her sing the songs they have come to love her for.

As a musical theatre performer Elaine Paige has starred in more smash hit West End and Broadway musicals than anyone else of her generation and continues to draw in more than 2.5 million listeners each week for her BBC Radio 2 show Elaine Paige on Sunday.

Isn’t this enough? This concert sadly made me feel that she doesn’t think so. She tells stories of a wild youth going back to a flats after shows with grass and a couple of bottles of wine, as if wanting to change the clean cut image many have of her. She has anecdotes about meeting Paul Simon and Paul McCartney that are interesting enough, but really who is going to be surprised that she has come across these singers – she is a big star too.

She didn’t have to work this hard to impress. It felt much more natural when she talked about returning to her childhood home and seeing the Bramley apple tree still standing in the garden her mother took so much pride over. There was a genuineness about that story that made us feel, this is Elaine Paige stripped back. She is the girl from Barnet who became a national treasure and whatever she chooses to sing we love her.

Elaine Paige in Concert was at The Bridgewater Hall, Manchester on 8 October 2016.