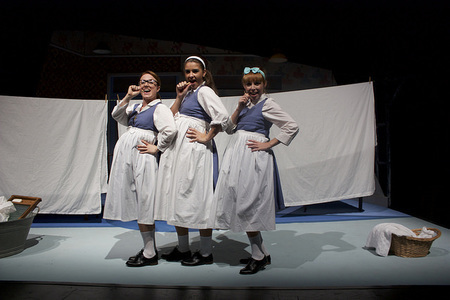 We often look back on the 1960s as a time of anything goes and sexual revolution. For a small elite it may have been. But for the majority of young people it was probably not unlike the world of Amanda Whittington’s Be My Baby.

Here we see both the innocence and harshness of the early 1960s side by side. Young girls, some still unsure how babies come into the world, find themselves heavily pregnant.

In what we now see as inconceivable cruelty the girls are locked away from society until their children are born; the babies taken away to be adopted at birth.

All this pain is borne with a stiff upper lip and the escape of popular love songs.

It is hard-hitting stuff, brought to the stage with the lightest of touches and plenty of laughs that captures the essence of an age and makes for poignant viewing.

The play, first staged 20 years ago, is now a GCSE study text. The script has kept its freshness and life. Although broad-brushed the characters have an authenticity about them that captures the complexities often brushed over in favour of demonising all involved.

A lot of this is thanks to the strong all-female cast, headed up by Brooke Vincent (Sophie Webster in Coronation Street) and Ruth Madoc (Hi de Hi and Little Britain).

Making a stage debut is a big deal for an actor and when you are already a household name it must be doubly nerve-wracking.

Brooke first stepped on the famous cobbles at 10-years-old and has grown-up on our screens. Now aged 24, she has been given a couple of months away from the soap to take on this new acting challenge as the bolshie Queenie.

Cheered on by her Corrie cast mates it is one she takes in her stride – confidently delivering the lines with the right impact and pace to get the laughs and showing just enough vulnerability in her character’s stroppy teenager exterior to sense the pain that’s caused her to isolate herself emotionally from all but the cheery pop single.

In many ways she is the other side of the coin to Ruth Madoc’s Matron, whose iciness comes from a matter-of-fact practicality. Naturally it takes a while to warm to such a character, but Madoc gives her a roundedness in an understated performance that leaves the audience feeling for her as much as for the girls.

The only let-down is the pace of the production, that hopefully will pick-up as the run continues. On press night at The Lowry, some of the scene changes feel a bit clumsy – some scenes ending abruptly with uncomfortably long pauses before the next. At one point in the second act people behind me were whispering, ‘has it finished?’ and even began a tentative applause before it set away again.

That aside, there is plenty in this play to applaud. And at the curtain call the vulnerability of these teenagers hits home again watching Brooke Vincent drop her character to become the excitable young woman inside, looking out from the stage to spot and wave to her friends and family in the audience. It felt like she was saying, ‘Look at me – I did it.’ And you did good, girl.