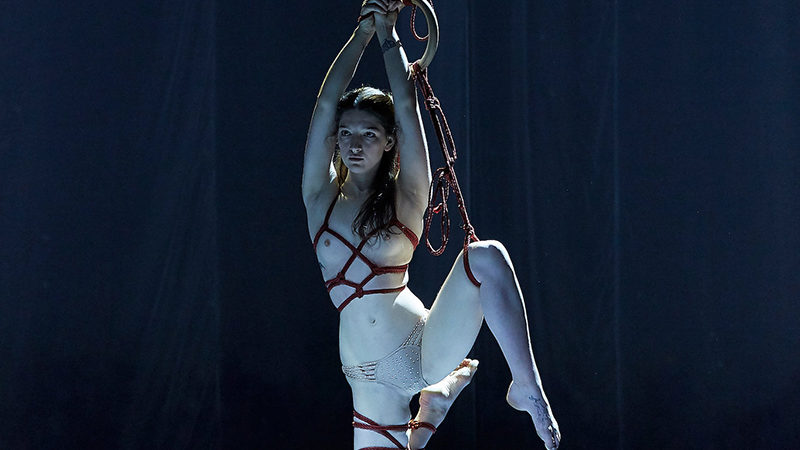 Everything I See I Swallow: Review

After a run out at the Edinburgh Festival, a reworked version of ‘Everything I See I Swallow’ has come home to the Lowry, its commissioning theatre.

Written and performed by Tamsin Shasha and Maisy Taylor (with assistance in the devising from Helen Tennison, who also directs), ‘Everything I See I Swallow’ examines a generational clash between an art curator and her artist daughter. Olivia, the daughter, has gathered 50,000  Instagram followers by posting selfies of herself, half-naked and bound in a variety of postures according to the Japanese rope art, Shibari.

Given that we enter the auditoriumto the sight of the (fully-clothed) mother (Shasha), her wrists seemingly bound, striding and struggling in “slow motion” around the figure of her daughter (Taylor) already serenely suspended above our heads, it may seem strange to say that ‘Everything I See I Swallow’ is slow to start, but so it feels.

While half the audience (myself included) are seated conventionally, the other half take up the invitation to sit or loll on an array of silver beanbags, looking up at the performance (no doubt enhancing the sense of voyeurism).

The mother, whose feminist journey began with her ‘sisters’ in the Greenham Common protest, and who raised her daughter alone, is left shocked and uncomprehending by the 18-year-old’s lifestyle choices (she’s in a polyamorous relationship) and her artistic portfolio.

This clash between generations of women is only one of the themes this 60 minute show tackles – the conflicting nature of feminisms, the tension between choice and duty to others, the proper response to patriarchy and male sexualising of women’s bodies, and more. Herein lies one of the difficulties facing ‘Everything I see I Swallow’. It’s not that it doesn’t know what it’s about, but that it is (perhaps necessarily) about too much for the time it has available. A further problem is that it is too disquisitional. The presentation of feminist politics, often spoken straight to microphone, is clear and pertinent, but dramatically unengaging.

The original feminist material spoken is elegant and thought-provoking, but more of a monograph than a drama.

“Isn’t sexual harassment just our lives?” the mother asks us, when reporting her lack of shock/surprise at the #MeToo phenomenon. How much more effectively might this have been woven into her daughter Olivia’s earlier observations about the way men started to look at her when she was just 13?

The piece finally begins to exert an emotional pull – and make effective use of those conflicting feminist thinkers – as we approach the climax: mother and daughter alternately seizing control of the microphone to enlist supporting quotations from feminist writers whose words (projected onto the backdrop as they are spoken) are at odds, one with another, over women, their bodies, their sexuality. (The words of Natasha Walter, Naomi Wolf, Judith Paltrow, Andrea Dworkin, Emily Bronte, Margaret Atwood, Angela Carter, Pauline Réage and even Beyoncé are called as expert witnesses for the prosecution or the defense). Here, at last, we have an angry dialogue (albeit spoken through borrowed words) between two generations of committed feminist. Here, at last, we have two women who love each other arguing with each other, not giving us a pep talk.

The finale, beautifully choreographed, involves mother and daughter (the former guided by the latter), in an acrobatic aerial pas de deux. It is physically impressive and emotionally uplifting. It might have been better earned, that’s all.

‘Everything I See I Swallow’ is a flawed but interesting production which, with some restructuring to bring out the dramatic tensions, might become exceptional.

Everything I See I Swallow is at The Lowry, Salford Quays from 11-12 September 2019.

Read our interview with the circus duo behind Everything I See I Swallow.