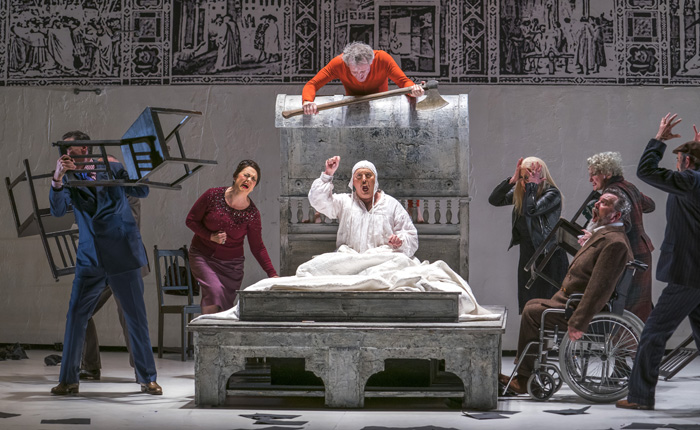 Opera North The Rite of Spring and Gianni Schicchi Review

Opera North may have found the perfect cultural response for our fast-paced digital age – ballet and opera in one evening.

The pairing of Stravinsky’s ballet The Rite of Spring with Puccini’s one-act opera, Gianni Schicchi at first seems an unusual choice for a double bill.

The ballet is famous for causing one of the biggest scandals in theatrical history during its first performance at the Théâtre des Champs-Elysées in Paris. The outrage at the premiere has become stuff of legend, and it is still unclear exactly why the piece evoked such an emotional response. Puccini, among the audience on the second evening, described the score as ‘the work of a madman’.

It seems where the composers were concerned the dislike was mutual, with Stravinsky reportedly saying he didn’t like Puccini’s music. One can only imagine what they would have thought about a shared billing. Perhaps it is just as well neither are here to contest it.

This is the first time Opera North has collaborated with Phoenix Dance Theatre and judging by the packed house at Salford’s Lowry Theatre on Friday the association seems to be working well for both Leeds-based companies. Phoenix Dance benefit from the performing with Opera North’s live 60-piece orchestra and the variation to Opera North’s usual programming has likely attracted a wider-audience to their revival of Puccini’s short, but popular opera.

The Rite of Spring is the first UK work for internationally-acclaimed Haitian choreographer, Jeanguy Saintus who uses all eight of Phoenix’s Company Dancers. The dance loses some of its shock-value in so far as there is no physical sacrifice. Instead, Jeanguy draws on concepts of initiation from Haitian folklore rather than there being the sacrifice of a human life.

However, it is still an intense and dark piece, with the choreography evoking an almost primal response from the dancers who move in and out of sequence, almost like a flame, with flashes of red on their hands and under the wrap-skirts of Yann Seabra’s floaty costume design.

The mood lightens during Puccini’s darkly comic opera. Soon after the opening an old man is smothered by an avaricious relative for his wealth. The family surrounding his bed are scheming caricatures, each so over the top our only response is to laugh, particularly when a kid decides to take a selfie with the corpse and then sit playing on his tablet at the end of the bed.

Based on an episode in Dante’s Inferno, the opera is a humorous morality tale about a family squabbling for inheritance. Conman Gianni Schicchi comes up with a plan to re-write the old man’s will, and in doing so puts himself at the centre of it.

We know what’s coming, but Richard Burkhard’s perfect timing and rich baritone make it hilarious all the same. Among all the comedic chaos of mules hanging upside-down from the roof and Dante clambering the walls, are some beautiful and instantly recognisable arias. A stand-out is ‘O mio babbino caro’ when Lauretta threatens to throw herself into the Arno if she can’t marry her love Rinuccio.

Tereza Gevorgyan and Diego Silva make for an unlikely pairing of sulky goth teenager, Lauretta and bookish casual, Rinuccio. But, put their voices together and it’s a match made in heaven. At the end Schicchi asks if old Buoso’s money could have been put to better use than to bring these two together. Despite all the underhand mischief we’ve got to agree it couldn’t.

Opera North’s double bill The Rite of Spring and Gianni Schicchi was at The Lowry, Salford Quays on 8 March 2019 and is touring to Newcastle and Nottingham.

Opera North returns to The Lowry in the autumn with Puccini’s La Bohème in November 2019.