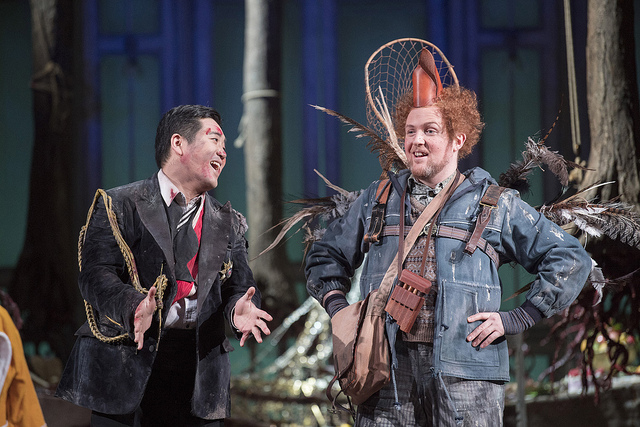 We expected something different from Opera North’s new production of The Magic Flute after director, James Brining described it during our interview as a ‘mash-up of The Handmaid’s Tale, Black Mirror and Dr Who’.

The result is a futuristic, almost other-worldly setting that is played out here like a child’s dreamscape. The opera begins with a young girl in her bedroom placing the needle on a record player to listen to a crackling version of the opening overture.

Beyond the bedroom we see the lights of a grand chandelier, before doors open to reveal a splendid dinner table. But looks are deceiving, because what starts with a formal grace ends with an unwanted guest and an almighty row.

Brining doesn’t return to the scene again, but the characters within it become the main players in the opera, watched on occasionally from the side-lines by the little girl.

The idea of the action being the figment of a child’s imagination and her parent’s feuding works well, particularly because there is so much within the story that fits a fairytale-style narrative – monster-sized serpents, magical instruments, supernatural powers, and a strange Freemason-style brotherhood sect.

Colin Richmond’s extravagant set and costumes immerse us in this world, creating alongside the music, a true feast for the senses, mixing multi-media projection with impactful props like the dangling trees, whose roots hang like blood-vessels ripped from the ground.

Kang Wang and Vuvu Mpofu make an engaging central couple as Tamino and Pamina. Gavan Ring is both charming and comic playing bird-catcher Papageno in his native Irish accent. John Findo nails the wretched molestster Monostatos and Samantha Hay is a scene-stealer on every entrance as the Queen of the Night.

It was announced at the start John Savournin had a cold on the Tuesday evening we saw his Sarastro, but it wasn’t noticeable in his rich bass notes that felt like they came from somewhere in the middle of the earth.

There is quite a bit of dialogue as well as singing in this opera, and at three hours long it sometimes feels drawn-out and over wordy in places. Perhaps some of the dialogue could have been cut because even though it’s sung in English, the story itself doesn’t always make a huge lot of sense.

Saying that, the tale and this production of it is nonetheless captivating. Many of the arias are instantly recognizable and beautifully sung. It’s at times crazy, dark, comic, repulsive, beautiful and touching. Mozart created an opera that is both unfathomable and fun, and Brining has captured this playfulness, making it one to let your imagination play and get lost in.