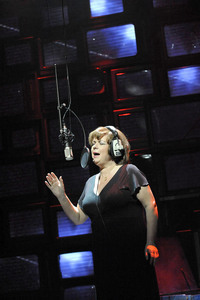 I Dreamed A Dream – The Susan Boyle Musical

If ever there was proof that miracles happen, then it is the tale of Susan Boyle.

We all laughed when Susan turned up at Britain’s Got Talent and claimed that she wanted to sing like Elaine Paige. Then she sang, and we had to eat humble pie, because she showed us up to be the shallow society we had become, where appearances were everything and talent was an after-thought. Three years on and 16 million album sales later, Susan is an international star. And she didn’t just get her dream of becoming a musical star, she got a musical written about her.

I Dreamed a Dream, takes its name from the Les Miserables song which propelled Su-Bo into an overnight sensation and a household name. Her story is like a real-life fairy tale and writers Elaine C Smith and Alan McHugh, who both star in the show, tell it as such, joking that it happened, “in a land far, far away – Scotland actually.”

It charts Susan’s life from its inauspicious beginnings as ‘an official April fool’. No-one expected her to amount to anything, not even the doctors, who told her parents not to expect too much of her, concentrating on what she couldn’t do rather than what she could. But despite the constant hard knocks life dealt her, Susan nurtured her dream of being a singer, and after 47 years of ridicule she finally got there in a way that no-one could have ever imagined.

Like Susan herself, there is little pretence about this show. The set design is a simple yet effective wall of old TVs on which different images are projected. The songs are an eclectic mix of popular oldies like, Crazy and Scarlet Ribbons, 70s hits Stuck In The Middle With You and Perfect Day, musical favourites like, Someone to Watch Over Me and I Dreamed a Dream, hymns to reflect Susan’s strong Christian faith, and some of her own tracks. The scenes and dialogue are deceptively simple, and warmed with a gentle humour that runs throughout the script. It’s a phenomenal story that has the power to lift no matter how many times we hear it.

Elaine C Smith (best known as Mary from Rab C Nesbitt) captures the essence of Susan brilliantly and has the audience on its feet by the end. When Su-Bo herself appears to sing after the curtain call, the atmosphere is electric. It has been an emotional journey and it obviously is for Susan still, as her voice cracked a little when she sang, I Dreamed a Dream. After her signature wiggle, she composed herself for a second song, Who I Was Born To Be, and leaves the audience laughing, crying, and believing in miracles.