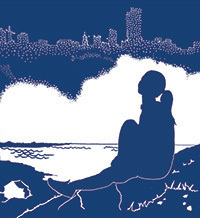 Stars Are Fire may sound a whimsical title, but there is nothing dreamy about this moving new play from Francesca Waite. Here, the emphasis is on both naturalistic performance and dialogue, in a script that deals with heartbreaking circumstances – the death of a parent and a wife.

The family tragedy leaves Neil to bring up his 15-year-old daughter, Carly, on his own. Both are hurting, each trying to cope with the loss in their own way. Sadly, their different responses to grief means that while Carly wants to remember, Neil wants to forget. He moves them back to Northumberland where he grew up, but Carly longs to stay in Manchester. The result is a silent stand-off, which leaves Carly voicing, irrationally, that the wrong parent died.

Their journey of healing is a long one, helped along the way by Neil’s cousin, Lou, who has his own loss to bear, and the stars – more visible over their new rural home.

The role of Carly marks the professional stage debut of actress Emma Clarke, and she pulls off a difficult part well, switching believably from sulky, argumentative teen to a mature young woman who is learning fast that life can’t be controlled. Steven Hillman’s understated performance captures the fragile emotional reserve of a father trying his best to keep it all together, while Richie Gibson is excellent as his cousin, Lou, bringing the perfect mix of awkwardness, vulnerability and humour to the character.

The play is another success for Manchester’s Monkeywood Theatre and an impressive debut from Waite, which highlights an ability to deal with the most raw emotions in a sensitive way, and which can’t fail to move.