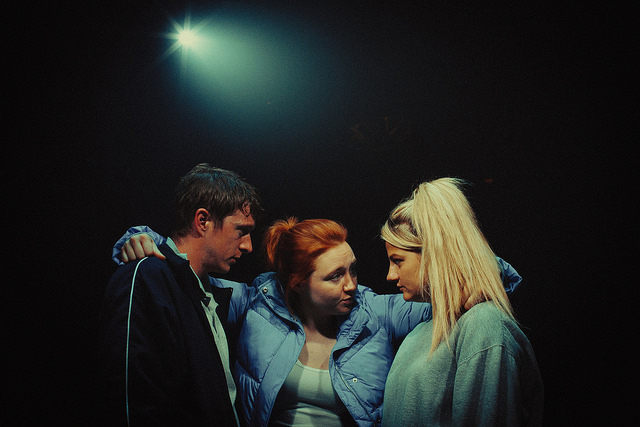 In Island Town we meet three teenage friends: Kate, Sam and Pete, who like nothing better than to hang out in the park getting off their faces on cheap cider.

At aged 16 their dreams don’t seem impossible. They don’t aspire to being astronauts or supermodels. Rather, what they long for most is a steady job and a loving home.

Pete (Jack Wilkinson) lives with his brother’s family and has fallen head-over heels in love with his newborn nephew. Now he wants nothing more than a family of his own. Finding a girl who will go on a date with him, so far is a major stumbling block.

Sam (Charlotte O’Leary) lives with her alcoholic dad and five-year-old sister. Her life sways from resident punch bag to surrogate mother. What she wants more than anything is a flat of her own, a regular job in a supermarket and to be able to take care of her younger sister.

Kate (Katherine Pearce) is a young carer for her dying father. Except she doesn’t seem to care very much for him or anyone else. Every word is spat out in rage, and her puffa-jacket is often half-on and half-off as if she doesn’t know if she’s coming or going.

From Kate’s point of view the ring-road is like a prison wall from which they need the courage to escape. She dreams of taking her dad’s car and driving along any road that will lead them out of this small island town. The main problem is she doesn’t want to do it alone. She wants to take her friends, exploding what she feels are their small-minded dreams into something bigger in the process. Until then, she numbs herself with booze and drugs, and at several points begs to be struck in the face so that the taste of blood will help her feel something.

Simon Longman’s dialogue spatters like bullets between the characters. There are also elements of lyrical beauty as the characters talk of a world beyond the horizon. But just like the characters, his story has nowhere to go. It is a bleak picture of youth and spiralling hopelessness, trapping people in a repeated cycle for generations.

The tight, bare space of Roundabout’s pop-up theatre gives added intensity to the themes. The emotional energy of the cast makes for compelling performances all round. But like the characters, at the end I’m left with an emptiness that strips me of caring.

The anger of youth is an age-old theme. As a society we should rightly be concerned that this narrative has recently become woven with one of hopelessness. But watching Island Town I can’t help wondering if rather than simply mirroring a truth, plays like this are fueling it.

Island Town is a Paines Plough and Theatr Clwyd production as part of the Roundabout season. It’s at Roundabout, Ordsall Park from 6-9 September 2018.