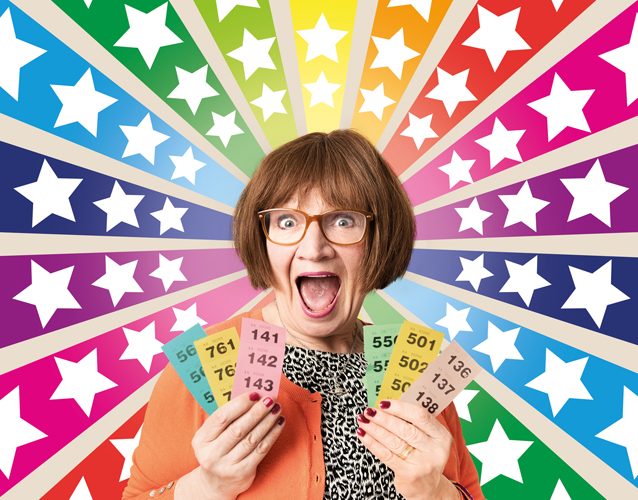 It’s 10.20pm and I am running around Ordsall Park playing, ‘What time is it, Mr Wolf?’ with Barbara Nice and about 100 other people, all wearing high vis jackets and giggling like we’re five-years-old again.

“It’s like a horror film,’ says Barbara as she races around in the dark, chasing one side of the crowd and then the other at the call of ‘Dinner Time!’

It certainly feels like we’ve stepped into an alternative world – and the rush of excitement and adrenaline has everyone leaving on a high. It’s genius.

Comedienne, Janice Connolly, known to Phoenix Night’s fans as Holy Mary, originally created her alter-ego, Barbara Nice to inject a bit more kindness into the comedy circuit. While most comics faced a rowdy crowd with an armour of choice language, blue jokes and turning their sharp wit against the audience, Barbara Nice kept it clean – winning them over with idle chit-chat, silly games and a sing-song.

Billed as an ordinary housewife, mother of five, keen Take A Break reader and occasional stage-diver, Barbara Nice is the woman who starts chatting to you on a bus and you’re quite happy to listen.

Dressed in a sleeveless leopard print dress, she tells us about her TKMaxx bargains, gives out big hugs to those who take to the stage with her, and steps back for just the right time to let an audience member take the shine of the spotlight. The effect is a party atmosphere of camaraderie that feels spontaneous and playful. At the same time this is clearly a tight and well-timed act, and for the audience the evening goes by in a flash.

At the Roundabout pop-up theatre there is a mix of ages and everyone is up for joining in from the start, with the whole theatre standing up for a mimed game of curling, before bursting into a chorus of Spandau Ballet’s ‘Gold’.

The show is called Raffle, and as it suggests there is a free raffle at the centre of it. Barbara spins us right round like a raffle and the stakes are high – the top prize is a tinned pie.

She later wields her comedy magic wand to turn us all into squirrels and asks whose seen her slide belly first down the stairs on a tea tray?

It sounds like an apocryphal tale, but when Barbara tells it, we all want to believe it’s true. At the Roundabout one audience member claims to know someone who had seen her do just that during a show at Sale Waterside. Whether she did or didn’t, it’s now the stuff of legend – and we can’t wait for Barbara Nice to stop off this way again to see what she does next.

Barbara Nice: Raffle was at Roundabout, Ordsall Park in conjunction with The Lowry, Salford Quays on 6 September 2018.