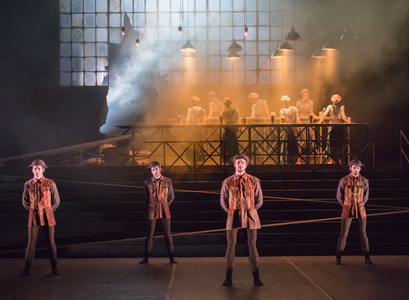 Commissioned to commemorate 100 years since the start of the First World War, Lest We Forget brings together the talents of three of the most sought after British choreographers to reflect, through dance, the lives and emotions of those who lived through the conflict, both at home and on the battlefields.

It premiered last year at the Barbican Theatre in London and a year on has been funded to tour to two venues, each for one night only – Milton Keynes Theatre and the Palace Theatre in Manchester. While I feel privileged to have seen it, I do hope that in time these pieces get to be performed to a much wider audience.

The first piece, No Man’s Land is a sensitive and absorbing performance, which captures the pain and emotions of both the men on the front line and the women working in the ammunitions factories. Both are carrying the weight of their worries and memories, and Scarlett captures this beautifully in movement that turns each of the sexes at various points into human rucksacks. There are also soaring moments of joy in the pas de deux, which only act to intensify the pain of separation.

The movement is choreographed around Liszt’s Harmonies poetiques et religieuses, originally piano pieces which have been orchestrated by Gavin Sutherland. Julia Richter plays some haunting piano solos and along with Paul Keogan’s atmospheric lighting and Jon Bausor’s evocative set design, it all comes together seamlessly to dramatic and heart-breaking effect. It is an astonishing piece of work, even more so considering that Scarlett is still in his twenties and it is wonderful that English National Ballet has given him such free reign for his young talent to flourish.

After such an overwhelming performance we’re left feeling where do you go from here? Incredibly the next two pieces don’t disappoint. Russell Maliphant’s Second Breath is a more forceful and angry piece that leaves us in no doubt about the huge numbers, of all nationalities, who fell during the conflict. The impact of 20 dancers on the stage is both striking and sobre.

The final piece, Dust won Akram Khan the Critics’ Circle National Dance Award 2014 for Best Modern Choreography. It is the first time that Khan has worked with a full ballet company and the result is stunning in every sense. Khan’s signature style is there in his story-telling and fluidity of movement that has us looking at the human body in a different way. Here he works again with composer Jocelyn Pook, who he worked with on DESH. Crackling and at times barely audible radio effects and voices add to the disorientation of the trenches he is recreating. Again, we get a rounded picture of the torment endured by both men and women at this time. There is tremendous strength and power in the dance, which culminates in a soldier going over the top in the trenches.

The dancers on stage are visibly young, strong and talented. So were the thousands who died – many even younger. It is a sobering thought and the deserved ovation was fittingly sombre. In Lest We Forget, English National Ballet is to be commended for bringing together a remarkable combination of talents to create a moving tribute to the men and women of the First World War.

Lest We Forget was at the Palace Theatre, Manchester on 24 November, 2015.