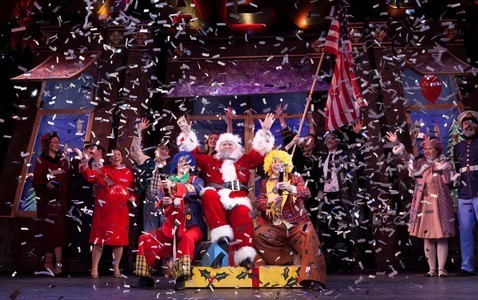 A story as well-known as, ‘Miracle on 34th Street’ has a lot to live up to in a stage-show retelling. Most people will know it from the 1946 Oscar-winning movie starring Natalie Wood, in which Santa Claus finds himself in court on Christmas Eve having to justify his existence. The story has since become a firm festive favourite, enjoying radio and TV remakes, as well as being given the full big-screen treatment again in 1994 with Richard Attenborough as Father Christmas, Kris Kringle.

The musical version, although it was first staged on Broadway in 1963, is less familiar. It was penned by Meredith Willson whose 1951 song, ‘It’s Beginning to Look a Lot Like Christmas,’ features in the show. The other songs are less memorable, but there are plenty of traditional carols and festive tunes in the mix to leave the audience singing on the way out.

Probably the most difficult part of the staging a touring production is finding a child or children to play young Susan Walker. Here the company has got around it by casting Hannah Thompson, who is in her final year of training at Italia Conti. Thompson is pretty and petite, and does a good job, but there is something lost in the magic of the production because there are no children in it.

That said the children in the audience visibly enjoyed it. In many ways the design of the show is geared towards junior-age children. The sets and characters are loud, bright and brash – almost cartoon-like. There are also elements of pantomime with water sprayed out at the crowd during the parade. Here everything is exaggerated, with over-sized candy canes, Cheshire cat grins, impossibly high-kicks from the dancers and frenetic flag-waving. It’s all very in-your-face, with the exception of Danny Lane, who brings a wonderful gentleness and calm to the character of Kris Kringle.

On Monday there were some problems with the sound early-on, but these were soon remedied and the whole cast were in fine voice, particularly Claire Hawkins as cold business-mum, Doris Walker and Carl Lindquist as the boy next door and fairy tale Prince who will finally melt her heart, Fred Gaily.

Setting up the scene and the characters can often be a bit slow and, despite the frantic choreography, the first act suffers a bit for this. However, it soon picks up after the interval and the courtroom scene wins them spontaneous cheers. At this point my initial doubts about the show make me feel very bah humbug. Lots of people around me are smiling and there is a feel-good energy that can’t be denied. The Christmas sing-a-long finale, with snow falling on stage and in the auditorium, is a definite winner.