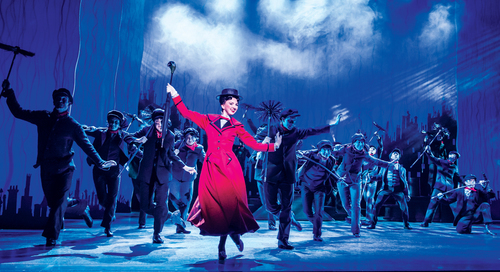 I never had a nanny as a child, but if I did I imagine like all children, I’d have loved one like Mary Poppins. Now, what I’d give for a touch of her sparkle and ability to tidy up in a flash. Spit spot.

I never tire of Mary Poppins – the quirky character, PL Travers wonderful story, and Richard M Sherman and Robert B Sherman’s fabulous songs. If you love the film with Julie Andrews (and Julian Fellowes gives her a nod by naming Mr Banks old nanny, Miss Andrews), you will fall in love with the character and story all over again with this stage show.

Disney still has a firm-hand on it, as co-producer with musical maestro, Cameron Macintosh, and it is the top quality you’d expect from both names. There are no cut corners here. You can see where the ticket price goes. The sets are knock-out and the special effects really are magical.

And what about, Mary? Well, as young Michael Banks says, ‘She’s bloody good.’

Zizi Strallen takes on the role with an air of mischief that has the audience under her spell from the start. We can well believe her favourite sugared spoonful is rum punch flavour, and we like her that way. Mary Poppins helps us see the damp, grey streets of London in glorious technicolour. She’s fun to be around and you can imagine her enticing the whole city to dance on the roof-tops.

Matt Lee as Bert makes for a perfect companion, with a cheerfulness that is deeper than his smile, bringing tangible warmth to his character. He is a mean tap dancer too and can even do his fancy footwork upside down – now that is something you have to see.

There are several sets of children throughout the run. On opening night we saw, Lucy Simmonds and Lewis Fernee as young Jane and Michael Banks. They are terrific. Milo Twomey (who will be recognisable to regulars at the Royal Exchange) and Rebecca Lock give fine support as George and Winifred Banks.

It’s a riot of a show for all ages, with grown men whooping with delight at Supercalifragilisticexpialidocious, and that was even before the interval. Step in Time also drew huge cheers from the audience and no doubt there were loads of people singing um diddle diddle diddle, um diddle ay all the way home – I am one of them.

This stage production includes some new songs from George Stiles and Anthony Drewe. One of them is for Mary called, Practically Perfect and this show is.

Mary Poppins is at the Palace Theatre, Manchester from 20 January to 5 March 2016.