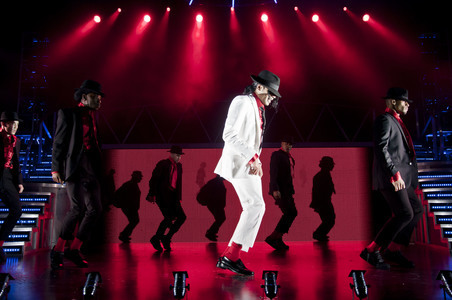 I never saw Michael Jackson live, but I imagine theatre was a large part of his concerts. Even his pop videos were events – think Thriller and Billie Jean, which were almost mini-movies. In this sense creating a stage show of his music makes perfect sense, and the audience obviously agrees.

Since its West End opening in 2009, Thriller Live’s box office takings have exceeded $150million worldwide and judging by a packed Opera House on Monday its legion of fans doesn’t show signs of dropping off any time soon.

For those who have already seen the show (and I’m sure this is a show that keeps fans coming back time and again) there have been some updates for the new tour including a new opening, four new songs, new video, costumes and special effects.

If you haven’t seen it, the show is a well-staged tribute to Jackson’s massive back-catalogue and innovative dance moves. There is a short introduction to the different periods of his work from his early Motown and disco to his moonwalking king of pop. However, this is not a biographical piece; it is about Michael Jackson the entertainer not the man, and while his music and dance moves fill the audience with nostalgia they, unlike the costumes, never feel dated.

It is high-energy with a fabulous live band and somersaulting dancers. The four talented lead vocalists bring different strengths to their numbers and this variety moves the show beyond impersonation towards a genuine appreciation of Jackson’s musical legacy. Rory Taylor excels in the ballads and brings genuine emotion to ‘She’s Out of My Life’; Tyrone Lee is a smooth operator; Shaguille Maerice Hermmans has a cheeky spark; Sean Christopher is the nearest to a Jackson impersonator and he has it all – the dance moves and the voice; but the real show-stopper is Manchester’s Cleopatra Higgins. The former lead singer with girl group Cleopatra still has that star quality for holding an audience’s attention – she’s Comin Atcha alright.