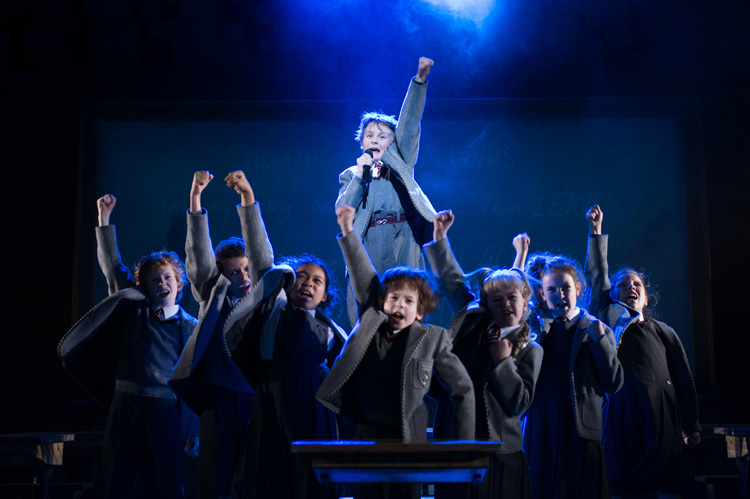 It’s been a long wait for young Roald Dahl fans in the regions, but after eight years the RSC’s multi-award-winning, Matilda the Musical embarks on its first UK tour.

The length of the run – 11 weeks at the Palace Theatre in Manchester – gives some indication of the excitement and anticipation surrounding this tour.

On Thursday’s opening night the audience had to wait a little longer, as the curtain was held-up for 10 minutes or so due to a technical hitch. But once it got started, nothing could dampen the enjoyment of this mischievous, magical and often moving musical.

Rob Howell’s set design is a complex mix of moving alphabet blocks, sliding school desks, playground swings and comic-book like home interiors. It’s a marvel it all moves in the right place at the right time as often as it does.

There are also incredible special effects and illusions by Paul Kieve. In one scene headmistress, Miss Trunchbull, a former Olympic hammer-thrower, swings a child by her pigtails and launches her into space and it’s all so fast and slick that even the adults are gaping at the illusion.

The evil, Miss Trunchbull is a big-bosomed, dame-like character whose school motto is ‘Children are Maggots’ and she delights in ‘breaking them’. Craige Els revels once again in the villainous role he played in the West End for three years from 2014 to 2017 and does a show-stopping somersault over the school’s gymnastic vaulting horse.

As the insults from the adults come thick and fast until we could feel the revolting, spit-balls of children don’t stand a chance. But young Matilda learns of another world through her reading. At five-years-old she reads everything from Dickens to Tolkien. While other parents marvel at the miracle of their children, Matilda’s parents would have her believe she’s not normal for wanting to read books.

Little do they know their daughter is a miracle in another way – she has superpowers to move objects using only her eyes. To get a child to carry such a complex and compelling role is another astonishing feat of this ambitious show. Sophia Ally’s justice-seeking Matilda is a wonderful mix of mischief and vulnerability. She is one of four young girls (Annalise Bradbury, Scarlett Cecil and Nicola Turner) to take on the role during the tour and was given a well-deserved standing ovation.

Tim Minchin’s score and witty lyrics demand some real tongue-twisters for the young cast, and never patronises. The closing song, ‘Revolting Children’ emerges like a rock ‘n’ roll anthem for any child who has felt unfairly treated at school. It is to today’s generation of youngsters what Pink Floyd’s Another Brick in the Wall was to mine. And judging by the terrific performances this young cast are capable of, we certainly shouldn’t be under-estimating the little maggots.

If you’re looking for the must-see show in Manchester this year, Matilda the Musical is it.
★ ★ ★★★

Matilda the Musical is at The Palace Theatre, Manchester from Tuesday 18 September – Saturday 24 November 2018. For details of the UK tour visit Matildathemusical.com