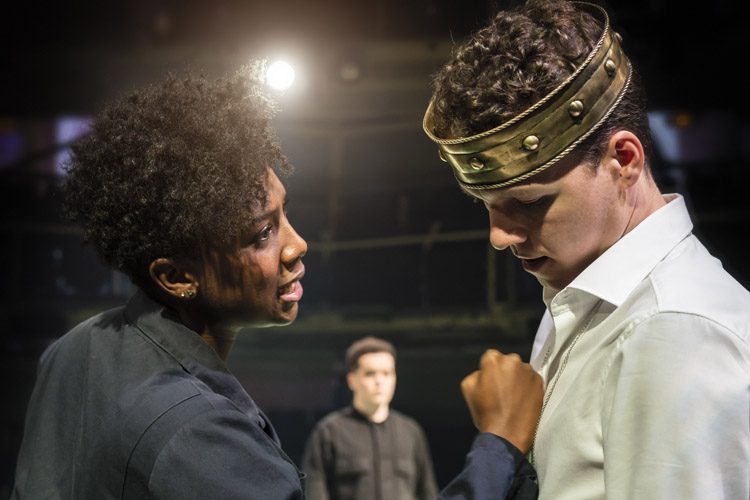 After sitting through countless runs of Shakespeare’s history plays, former literary manager of the RSC Jeanie O’Hare worked out that the Bard wrote more lines for Queen Margaret than he did for King Lear.

How could this be when most of us have never heard of her either as an historical figure or a character in a play? Well, it seems that while this often-overlooked wife of Henry VI has a lot to say, her voice is scattered over four plays – the three Henry VI plays and Richard III – so unless, like O’Hare you get to watch 12 hours of Shakespeare within a relatively short period of time, it’s unlikely you’d have remembered her.

As we all know, changing the perspective can give a whole new view of a story, and that is exactly what O’Hare has done in penning Queen Margaret. She’s taken a series of scenes from Shakespeare and woven them into a fresh telling of the War of the Roses, seen through the eyes of this 15th century Queen.

The play opens as a young Margaret of Anjou arrives from France to wed Henry VI and take her new place among English royalty. But as we know from history she arrives in a turbulent time for British monarchs – with innumerable plots against the crown and rivals willing to kill to take it.

Jade Anouka makes a strong and complex Queen, who displays humour and humanity as well as a blood-thirsty brutality. Her performance is compelling from the start, but it takes a while for the production to gel.

An understandable element of scene-setting accounts for the slow start, but at times it is also confused by the fact that this is, in essence, a disparate number of scenes being welded into a whole.

Adrienne Quartly’s thumping soundscape builds a tangible tension as the warfare plays out as a game on what looks like a dart-board, where knives fall and in one striking scene bullets spatter from the sky.

The characters wear contemporary dress, workplace lanyards around their neck in court and bullet-proof vests on the streets. At times this mix of time and place is off-putting, but it also makes for some witty 21st century references to looting large screen TVs, gaming culture, fake news and an obsession with selfies.

O’Hare throws in other twists in that the Duke of York (a formidable, Lorraine Bruce) and Earl of Warwick (Bridgitta Roy) are played as women. Margaret’s French roots and the legacy she brings to the story are highlighted through her conversations with a ghostly Joan of Arc (Lucy Mangan).

Max Runham portrays King Henry VI as a good, rather than a weak man, who doesn’t have a thirst for blood, even if his longing for peace means disinheriting his son of the crown.

Queen Margaret, of course, will not stand for that and the second act becomes a gripping and gruesome battle for the crown.

The historical thriller that emerges feels both familiar and unfamiliar at the same time, and will no doubt get people re-reading their history to find out more about this fiery, forgotten queen.

Queen Margaret is at The Royal Exchange, Manchester from 14 September to 6 October 2018.