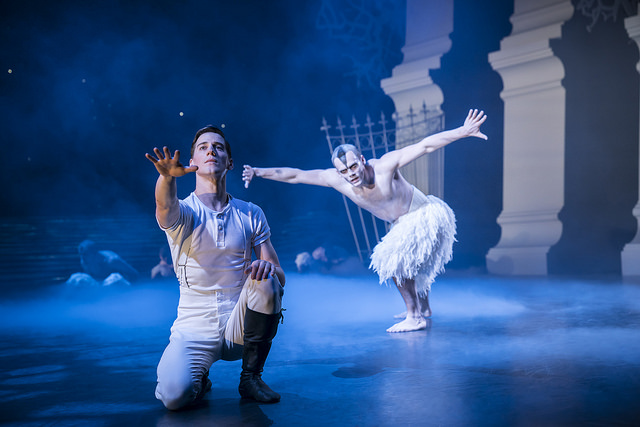 As New Adventures catalogue of dance grows, so does the time between opportunities to see individual dance pieces on tour. It’s five years since Matthew Bourne’s Swan Lake last played the Lowry stage, and judging by the packed auditorium on the first night of this two-week run, the appetite for audiences to see it again is clearly strong.

That audiences are keen to see Swan Lake is not surprising, Tchaikovsky’s classic has been enchanting ballet fans for almost 140 years. However, Matthew Bourne’s imaginative interpretation is Swan Lake, but not as you know it. If you imagine there are two ways to view swans. One as delicate creatures, gliding gracefully across a lake; the other as wild, powerful birds with the strength to break your arm if they wanted to – Matthew Bourne’s sees them as the latter.

Here the traditional corps de ballet is replaced by a male bevy of swans – bare-chested dancers whose muscles are visible expressions of their strength. Like swans, they hiss and flap – sometimes playfully, but always wild. And although this scene is no longer the surprise it was to early audiences when it premiered in 1995, it is still a striking and enduring image.

Choreographer, Sir Matthew Bourne and designer, Lez Brotherston have re-worked this production for the 21st century. It feels fresh and energised, but it also very-much the same impactful production, that has become a classic in its own right.

In this fairy-tale land all the surroundings are exaggerated and over-sized, while the costumes and movements are pinch-perfect tight. Dominic North’s precision and poise make him the perfect Prince. Regular New Adventures audiences will recognise him as he has been with the company for 14-years and danced many of its leading roles, bringing a strong acting quality to his dance that pulls us further into his inner-struggle.

Dancing opposite him, Will Bozier makes a towering and impressive swan. And he positively sizzles in his leather pants as the stranger (manipulative black swan), seducing every woman in sight, and the Prince, at the Royal Ball.

Alongside this electric passion and high drama, there is also humour in this royal household. A wheeled corgi delights, there’s a cheeky real-life David-esq statue, lively dancing in Swank bar, and a brilliant comic scene with the Queen (Katrina Lyndon) and Prince’s socialite girlfriend (Carrie Willis) in the royal box, challenging royal protocol and the audience’s snobbery. Young princes falling out of clubs worse for wear and being caught by the paparazzi doesn’t have the same relevance now our young Princes have grown, but it still makes for fun viewing.

It’s all atmospherically lit by lighting designer, Paule Constable, who makes good use of projection for the swans in flight and makes Lez Brotherston’s expansive lake shimmer under a full moon.

After 23 years the vibrancy of this once revolutionary production is as mesmerising as ever.
★ ★ ★ ★ ★

Read our interview with Matthew Bourne about re-staging his iconic Swan Lake.