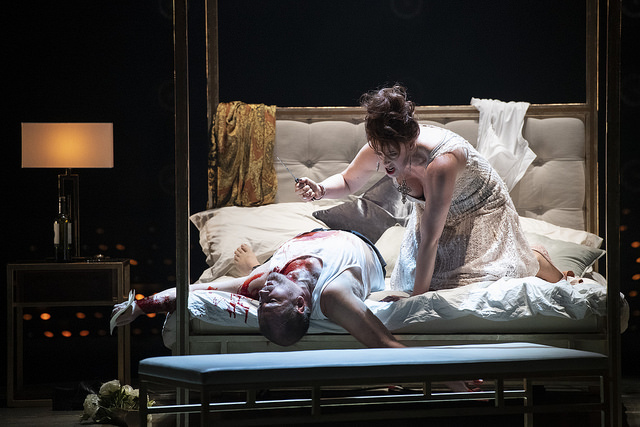 Opera North is celebrating 40 years as the opera company for the North of England and what better way to celebrate than with a new production of one of the most accessible and popular operas, Puccini’s Tosca.

If you are looking for an introduction to opera, this is an excellent choice. From the moment it opens, a blast of dramatic chords plunges us straight into the action with film-score intensity.

Tom Scutt’s set design is a spectacle too, with a huge rotating dome ceiling, and spotlight surrounds. This story, which has a painter as a central character, feels also like we are looking at a work of art – it is both striking and beautiful.

Florida Tosca, Rome’s star opera singer, is both striking and beautiful too. Here Belfast-born soprano, Giselle Allen is a singer playing a singer. She’s both confident and extrovert, sought-after and vulnerable. Her voice has a piercing quality at times that drives the melodrama into lines of hysteria.

Tosca is passionately in love with artist, Cavaradossi, sung by Mexican tenor, Rafael Rojas. Regulars to Opera North will recognise Rojas from his recent appearance at The Lowry as Gustavo in Un ballo in maschera. He has a wonderful richness to his voice that can instantly transport us away from the corruption and baseness of life exposed through the rest of the drama. As a romantic lead he soars and sparks with passion.

Unfortunately, his lover status cannot protect him from the political turmoil. When he helps a political prisoner to escape, Cavaradossi is arrested in the church where he is working and tortured by Scarpia, the corrupt Chief of Police.

This explosive mix of religion, art, politics, power, obsession and lust collide in a forceful end to act I, with the full chorus on stage, cardinals wafting incense across the auditorium and secret service holding machine guns to a child’s head.

Act II is all about Tosca’s indecent proposal from Scarpia (British baritone Robert Hayward) – a powerful man who offers Tosca something she desperately wants in exchange for sexual favours. There are definite parallels to the recent #MeToo scandal, and Hayward gives the character a more chilling feel by presenting him as believable rather than the pantomime villain Scarpia could descend into. The second act ends with a bloody murder, and yes there is still one more act to go.

If you were worried you wouldn’t know what was going on, don’t be. In Tosca the whole range of life’s emotions are out there for you to see in glorious intensity and often horror.

The whole drama plays out over a period of a few hours – giving it an exciting and dramatic feel. We leave as if we’ve been caught in a tornado that’s finally silenced, and it feels exhilarating.
★ ★ ★ ★ ★

If you think opera isn’t for you, read our myth buster for common misconceptions that might be holding you back from experiencing it for yourself.