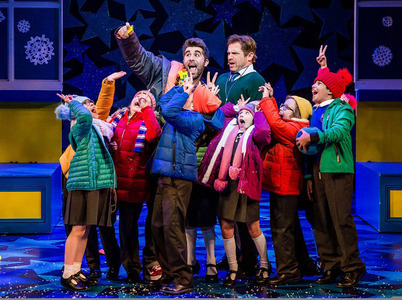 Everyone loves a good underdog story. Throw in cute kids, catchy tunes, a real-life pooch, and you’ve got a tale to leave no heart-string un-pulled.

Writer, Debbie Isitt knows how to pen a winner. Currently working on the fourth installment of her Nativity film series, it’s an idea showing no signs of slowing down. Considering its popularity, perhaps it’s surprising the story took so long to make it to the stage. Watching, however, it’s easy to see why a live version took so long.

Step in fairy godmother, Mr Poppy (Simon Lipkin), a manic teaching assistant whose energy and humour saves the day in every sense – rescuing the musical from schmaltz with his playground rap and slapstick pranks.

But this isn’t a show about the adults. This is a show for children about children. And it feels like Isitt, who also directs, has done a Mr Poppy – asked youngsters what they would like to see, then given them everything.

There is a lavish set with huge wrapped-presents, sparkling stars, flying youngsters, snow, coloured lights and gold streamers. Even the school yard has the attraction of a sweet shop, with fluorescent hula-hoops, skipping ropes and bright-blue footballs. The children near me had their faces pushed over the seats in front to get closer – it was magical to watch how well Isitt had cast her spell.

How Birimingham Rep found so many fantastic little actors, is another bit of magic to add the real Sparkle and Shine to this production. Heart-warming and hilarious – Debbie Isitt has another winner.

Nativity! The Musical is at the Palace Theatre, Manchester from 29 November to 3 December 2017.