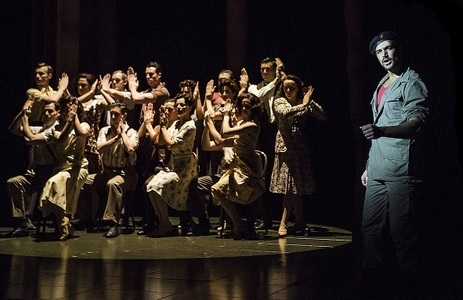 Eva Peron is reported to have once said: ‘My biggest fear in life is to be forgotten’. Well, if she was as ambitious as Madalena Alberto portrays, you could be forgiven in thinking the former Argentinian first lady has aligned the stars for this current UK tour of Evita.

When choosing a real-life character on which to hang a musical, Tim Rice and Andrew Lloyd Webber came up with a winner in Eva Peron. First staged in 1978, Evita made a star out of Elaine Paige and many will remember Madonna’s film version.

For dramatists, the life of dictator Juan Peron’s glamourous wife gives plenty to work with – a story of power and fame; poverty to riches; revolution and corruption. Combined with Webber’s emotive score, including such memorable hits as ‘Don’t Cry for Me Argentina’, ‘Oh What a Circus’ and ‘Another Suitcase in Another Hall’, it makes for a fabulous musical.

Nevertheless, it’s easy to become jaded when reviewing a production that’s been touring for 10 years like Bill Kenwright’s Evita. It’s easy too, with a successful show for producers to take the audience for granted, rolling out the same show time and again without offering something new. A star name is the usual go to for bringing in a new crowd. But rarely do we get a long-running production revived with the star quality seen in this current tour.

Madalena Alberto is not the type of household name we’ve come to associate with the star-turns in so many well-worn musicals. She isn’t simply someone famous thrown into the part to put bums on seats. Of course, that type of casting does bring people through the doors, but it doesn’t leave them with the emotional response Alberto creates. Both seductive and fierce as Peron, we can imagine the public being swept-away by her image. In the true sense of a much over-used word, her charisma and talent combine to make her a true star.

No wonder, Kenwright brought her back four years after her critically acclaimed run in the part. I saw that tour in Manchester in 2013. Madalena felt wonderfully cast then. Now she is on fire. Turning ‘You Must Love Me’ from a vulnerable ballad to a final command, she strips it of sentiment and makes Evita feel like a whole new show. It is a strong dramatic performance the likes of which is rarely seen in musicals.

Gian Marco Schiarett is also brilliantly cast as Che, whose cynical voice brings through a stronger sense of rebellion than I’ve felt in some other productions. He is a strong, clear narrator, whose permanent scowl forces us to question not just Eva’s position but the danger of turning our politicians into entertainers today.

‘Oh what a show’ indeed.

Evita is at the Palace Theatre, Manchester from 6-9 December 2017.