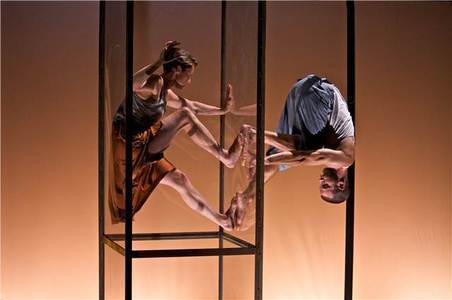 Not Until We Are Lost

The word ‘lost’, when used to describe the human condition, is rarely straightforward. And in this latest work from aerial dance company Ockham’s Razor we are presented with a number of short interactions that lend themselves to a variety of interpretations.

In the programme the creators admit that they set out with no clear idea of where they were going. Taking its inspiration from the Henry David Thoreau quote, “not until we are lost do we begin to find ourselves”, the idea for the show was to create a feeling of being lost and see what new discoveries and creativity arose while trying to find a way.

The result is an inventive and at times exhilarating piece, which brings the audience right into the heart of the action. Performed in a promenade style, the audience stands just feet away from swinging bodies and flying metal frames, which gives a real sense of the strength and speed of the performers as well as how much each relies on the others to make the routines work.

The main action takes place around a playground scaffold and a long perspex tube, in which the dancers suspend and contort. Themes of isolation, suffocation, panic, being saved by another or finding a way out alone are all touched upon, accompanied by a hypnotic new score created by Graham Fitkin for harp and piano, which features three choral arrangements performed by twenty members of the Open Voice community choir, who wander through the audience as they sing.

Perhaps like being lost, some of the show is disappointing that it doesn’t lead anywhere, some of it leaves you with your heart in your mouth, some evokes a feeling of sadness, while other parts make you stop and think. But, for me, the real lasting memory is a joyful sense of freedom as the performers fly through the air in unison, sending out a rush of air into the audience and making it seem so effortless.