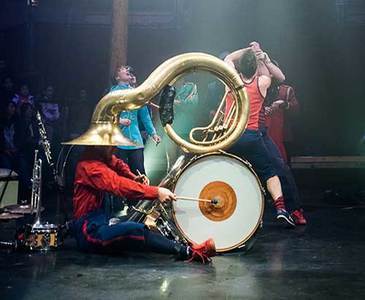 The rising popularity of Cirque du Soleil has upped the ante for all circus troupes, large and small.

Audiences are demanding more from circus entertainment but smaller companies are rising to the challenge with quirky, multi-talented acts, of which Circa Tsuica is a wonderful example.

Not only are the performers skilled acrobats, they are also accomplished musicians and masters of clowning.

It is a small circus troupe – six men and one woman – so there is no resting for any of them during this 80 minute show.

Although French, their name, ‘Tsuica’ comes from the Romanian word for brandy which we’re told they chose because it expresses the party spirit at the heart of their performance.

Indeed watching them does feel like we’re at party and one to which everyone is invited – with singing, music, high jinx and at one point a full band dancing through the aisles.

I say full band because for the Lowry performances Tsuica are joined by MAPAS Big Band – a children’s wind band from Salford Music and Performing Arts Service.

I know that starts to sound worthy, but stick with it. While this is a fantastic opportunity for the local youngsters whose band is celebrating its 50th anniversary this year – and talented they are too – incorporating them into the show by seating them in the centre of the stalls adds to the playful, mischief making of this act and brings a magical element that only comes from the additional energy of an audience who are genuinely enjoying themselves.

Whether it’s jive-dancing with hoops, swinging the high rope or balancing three-high while playing the euphonium these skilled dare-devil acts are made to look like a piece of cake.

The action is accompanied by a lively rag-time jazz sound with the instruments, including a massive sousaphone, fully-integrated into the acts.

This is clowning at its best – cheerful, slap-stick, silly humour that wraps you up in its colourful,  zany world. Whether you are five or 55 this infectious mix will leave you with a spring in your step and a smile on your face.