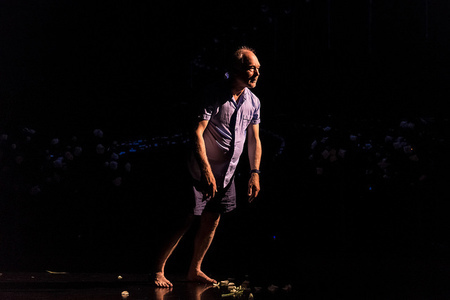 Things I Know To Be True

There are few things in life we know to be true, and one is that there is nothing as complex as families.

They have been at the heart of good drama for centuries, and in this new play Andrew Bovell takes us into their darkest secrets and most painful fears.

Of course, there is joy to be had, too, but in this play it is fleeting. Here the drama is driven by heartbreak, anguish and searching for an individuality outside of the family unit.

The play opens with 63-year-old Bob Price, the father of this family of four, poised at a 45 degree angle as if suspended in both time and space, while a phone rings in the early hours of the morning.

This physicality in the performance is a feature of theatre company Frantic Assembly who co-produced the show with the State Company of South Australia.

Directors Geordie Brookman and Scott Graham have added several silent interludes such as this, where the story is told through physical movement. Sometimes, as in the dream sequence where mum, Fran imagines a different life, work beautifully like dance. Others, however, like the random movement of furniture during the dialogue, can feel distracting.

The play premiered earlier this year in Adelaide, Australia, where the action is set. For its UK run, co-produced with Warwick Arts Centre in association with Chichester Festival Theatre and Lyric Hammersmith, there is a new British cast.

The setting is still Adelaide, but the actors have British northern accents. The programme tells us it’s meant to symbolise the universality of the piece – but in many ways this overt symbolism simply distracts.

Thankfully the strength of the performances quickly lifts the audience past this. Imogen Stubbs embodies the ferocity of maternal love as Fran, while Ewan Stewart brings a sanity and steady hand to the character of Bob that gains him both empathy and sympathy from the audience, looking on as the chaos of his family life unfolds.

Most of the action takes place in the family garden. Geoff Cobham’s beautiful set, a spacious garden overlooked by a sky of tungsten bulbs as stars, captures the imagination with a subtlety that unfortunately much of the play lacks.

Symbolism runs through every aspect of this production, some of which works and some of which feels heavy-handed on an audience already weighed down by the emotion of the characters’ intricate lives.

By the end I feel like echoing Fran’s weary cry: ‘I’m tired.’ I found it exhausting, but nonetheless it roused emotions we all know to be true and brought the audience to its feet in response.