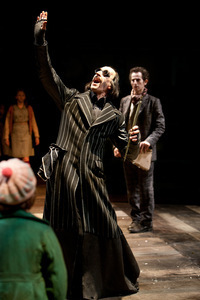 Fairy tales have always had their dark side, but judging from the recent popularity of Harry Potter and the Twilight series it seems these days that children prefer their stories even darker.

In this context the Royal Exchange’s new Christmas show, Rats’ Tales, fits perfectly, although neither the content nor the length of the show is suitable for very young children. Poet Laureate Carol Ann Duffy presents eight stories inspired from folk tales around the world, including the Pied Piper of Hamelin as well as from her own collection of stories, The Stolen Childhood. Nothing is glossed over in this world of scheming politicians, cruel fathers, wife-beating husbands, mothers with terminal illness, and even a mother so vain that she is willing to steal her own daughter’s youth to bring back her own.

Each tale has an underlying moral, and the baddies do get their comeuppance at the end. However, this does feel rather vengeful at times, with the evil characters often being driven out rather than reformed.

However, although writer Carol Ann Duffy will no doubt be the draw for much of the audience, this production is very much a collaborative success. Director Melly Still utilises the Exchange’s unique space to full effect – I can’t remember seeing better. This is helped enormously too by Anna Fleishle’s inventive design, and strong performances from all the cast, particularly Michael Mears as a mesmerising Pied Piper and Hiran Abeysekera as the rat devouring, troll baby.