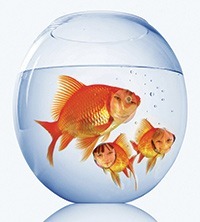 Whoever said school days are the best of your life never lived on the council estate in Lisa Whiteside’s new play, Goldfish. Growing up in 2012 can be tough, and sadly Whiteside’s bleak script paints an all-too-familiar picture for some youngsters today.

Inspired by Whiteside’s work as a youth leader running drama-based activities on a housing estate, the play tells the story of three children, not yet in their teens, who are thrown together by circumstance.

“It may just be a goldfish, but it’s my goldfish,” says Abby (Zoe Iqbal) holding it up in the plastic bag that she won at a fair. She’s out with Leanne (Keeley Fitzgerald), who isn’t her friend, in fact she wishes she’d go away, but they are together because they are both under child protection, which means they can attend a youth scheme run by Lou (the writer, Lisa Whiteside). It’s clear that these children have nothing to care about and no-one to care for them. They are the messed up, mixed up Jeremy Kyle generation, trying to make sense of a world that has no sense to offer.

Then there is Cody (Ciaran Clancy). He’s the posh boy, or so they imagine. He’s living on the estate because his parents got divorced and his mother couldn’t afford their other house any more. He doesn’t understand why he can’t go to the youth group with the girls. Looking from the outside, these adult rules seem unfathomable, too.

What unfolds is upsetting and disturbing. There is child rape, drug abuse and arson. Even the so-called safe haven of a youth centre is marred by redundancy, extra-marital affairs and deception. In a world where no-one is taking responsibility, the three children drift aimlessly from one upset to another, using all their energy just to survive.

It is a hard-hitting play, which packs a lot into an hour, without losing its believability. Strong performances from the actors playing the children are key to the success of this production. All three are believable in their vulnerability. And although the play itself offers no hope, perhaps the audience’s response offers the hope that’s lacking, recognising a need for better adult role models for our children.