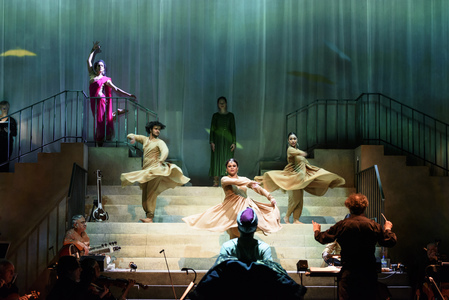 To say that Sukanya is Ravi Shankar’s only opera, while true, gives a misleading impression of his talent and influence on world music. Knowing he began writing it in the eighth decade of his life tells us more about his enthusiasm for music and his constant desire to find new ways to express this.

It was to be his final work, and one can only imagine the weight of that in the hands of David Murphy, who completed the opera alongside Shankar’s daughter, Anoushka. Almost five years after Shankar’s death Murphy conducts the London Philharmonic for the opera’s premiere performances – the second of which is at The Lowry, Salford.

It feels like a true celebration, both of a life and of a true fusion of West and Eastern traditions. It opens with a solo sitar, the instrument for which Shankar was best known. Hearing Parimal Sadaphal play is probably as close as we’ll get to experiencing how Shankar might have interpreted it, given that he was taught by Shankar himself from the age of seven.

Sadaphal sits to one side of the foot of a wide staircase that opens to raised platform. At the other side sits Ashwani Shankar on the shehnai, an Indian instrument, like an oboe. The orchestra is seated on the stage and includes musicians playing the tabla, mridangam and ghatam percussion.

The scene is finally set using projections on to a backcloth, which take us from a night sky to a jungle, a palace and at one point we are in a room with photos of the maestro himself on the wall. Five classical Indian dancers, wearing ghungrus foot bells and five singers tell the story, supported the BBC singers chorus on both sides of the platform.

Visually there is a lot going on. At first it feels like the five singers are having to battle for attention. But, perhaps because in essence it is a simple static scene, the atmosphere settles quickly and the overwhelming sense is one of space and rest. There are some wonderfully peaceful moments in the music as well as moments of vibrancy and joy.

The story is based on a tale taken from an ancient Sanskrit, Mahābhārata. It tells of a young princess, Sukanya, whose destiny leads her to marry an old sage, Chyavana she finds in the woods, and her love is such that it restores both his youth and the sight to his bleeding eyes.

Shankar, who was 30 years older than his widow Sukanya, is said to have seen a connection between this ancient myth and his own life. So, the opera is named after his widow and it is as much a love letter to her as it is to his music.

The story itself is stretched to its limits, and there is one scene where Chyavana (Alok Kumar) sings to Sukanya (Susanna Hurrell) about the differences between Eastern and Western music, where we feel we’re being lectured to rather than entertained.

On the whole, this mythical love story is presented with a lightness of touch. The passion created is for the music and Shankar’s legacy is a genuine fusion of Eastern and Western traditions that feels a natural harmony.