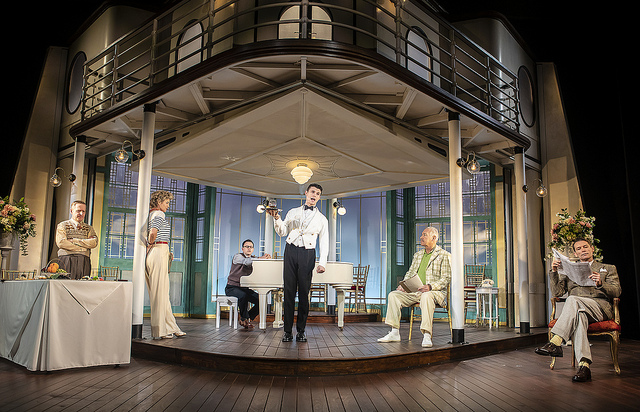 Some lesser known works of famous writers can be delight when dusted-off and given fresh life on stage. And on the face of it, this revival of Tom Stoppard’s 1984 comedy, Rough Crossing has a lot to commend it.

As a dramatic writer it seems there is no accolade Stoppard hasn’t achieved. He won the Oscar for Best Original Screenplay with Shakespeare in Love, and five of his plays have won Broadway’s coveted Tony Awards. The chance to see one of the neglected comedies from his vast back-catalogue is an audience draw itself.

On top of that, producer Bill Kenwright has brought together a top cast, including household name John Partridge, who played Christian Clarke in EastEnders and this year took the Celebrity Masterchef crown.

The backstage team has high credentials. Director Rachel Kavanaugh is fresh from directing a Christmas season at the RSC and brings with her rising star Charlie Stemp, who recently took the lead in her Chichester Festival Theatre production of Half a Sixpence.

And for the icing on the cake name-dropping – legendary composer Andre Previn wrote three original songs performed in the play.

The opening is promising. Colin Richmond has created a luxurious and spacious 1930s cruise ship setting, with double-deck cabins. There is also an air of elegance in his costumes, but the attire of the guests is where the characters’ sophistication ends.

For a comedy we are not expecting more than a light-hearted narrative, but the chit-chat at times is so vacuous we wonder if the story and sadly the gags have been lost over-board.

The general gist is there are two playwrights, Turai (John Partridge) and Gal (Matthew Cottle) who have until the ocean liner reaches New York to complete a new script and rehearse the show ready for opening night. The problem is they don’t yet have an ending and worse still, fear their whole company may dissolve after shenanigans between their leading actress and actor on board ship.

To add to the complication, their sensitive composer is engaged to the leading lady and overhears her talking intimately with her leading man.

Meanwhile, young waiter Dvornichek, played with a lively spark by Charlie Stemp, floats in and out of the party causing chaos on his unsteady sea-legs. Unfortunately, he is given the same joke each time he comes on stage. It might be worded in slightly different ways, but effectively it is the same gag and Stemp deserves a medal for managing to stay so chirpy as he delivers it for the umpteenth time.

Cottle too is a master of deadpan comic timing. He can get a chuckle out of the most casual lines and smallest gestures. But even getting him to absurdly chomp on a carrot for much of one scene cannot distract from the sparse material the cast have to work with.

John Partridge has a strong stage presence. He looks the part and brings the necessary energy to the role, at one-point leaping onto and doing a belly slide along a piano. Yet, for all the cast’s brilliant efforts it is not enough to save this sinking ship.

We’re left feeling there is perhaps a good reason why Rough Crossing has been neglected. If you’re keen to see all Stoppard’s works performed, then this production is likely as good as any you will see. For it is Stoppard’s material that falls flat in this comedy, proving even geniuses aren’t always geniuses all of the time.

Read our interview with John Partridge and Charlie Stemp.