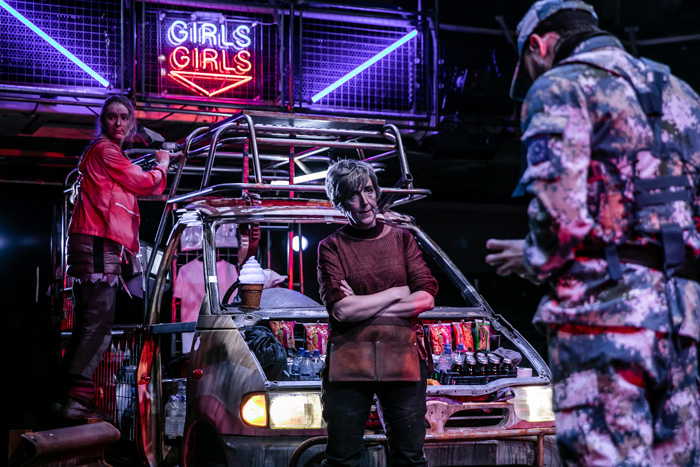 Mother Courage and Her Children at The Royal Exchange, Theatre Review

Brecht’s classic anti-capitalist tale of war is catapulted to the end of the 21st century in Anna Jordan’s raw, new adaptation, and its bleak nihilism given bursts of colour by director, Amy Hodge’s nod to 80s punk rebellion.

Originally set in Europe’s 30 years war of the 17th century, Jordan turns the clock forward to 2080 where war is raging once again across Europe. The continent is unrecognisable from the country boundaries we now know; divided into a grid where there are two warring factions, Red and Blue.

Mother Courage, however, sits with neither; switching allegiance depending on circumstance. What’s clear from the outset is her real allegiance is to herself and her three children. For her family’s survival she’ll hawk her wares to profit from anyone’s misfortune.

Here the story is little changed. Although there is talk of nuclear weapons, war is still up-close fighting with towns and villages destroyed by rampaging soldiers who rape and pillage to take control. There is a sense of the never-ending drudgery and desperation of dispossessed populations, drifting from place to place.

There is no technology that tells us we are in an advanced age, no cell-phones or Internet for Mother Courage to contact her son during a rare outbreak of peace – no sense society has learned from past misfortunes or has moved on.

As time progresses little changes. The stage revolves to an eclectic soundtrack from Jim Fortune. There are occasional haunting and beautiful melodies, but for the most part even the singing is harsh and distorted.

Joanna Scotcher’s stark and grubby design makes us question as a society how much our humanity has developed. Is the updated language with its foul-mouthed, four-letter harshness, all that distinguishes the characters from those who struggled through war centuries before?

But although set in war, the play’s relevance is deeper, reflecting on the dehumanising forces of a society that puts profit before people. Here Mother Courage demanding payment for her water during an attack is a direct reference to Starbucks charging for water needed to help victims of the 9/11 terrorist attack.

Julie Hesmondhalgh is a confident and vibrant Mother Courage. Her trusty shop cart is an old ice-cream van, which she leaps over the bonnet and through the open-windscreen to get into. She’s an opportunist, who sells whatever people want to buy. Perhaps once it was ice-cream, now it’s bullet-proof vests. Soon it will be sex, burgers, booze and weapons. When asked if she’d sell to terrorists, she replies: ‘Yes, I would.’

In many ways, Julie Hesmondhalgh has too much natural warmth to play such a world-worn character. But her likeability also makes the complexity of her character more harrowing to watch. In her Mother Courage we understand the basic human instinct for survival. Humour is part of this and Hesmondhalgh captures this dark comedy with a steely wit. When a soldier eyes-up her daughter saying: ‘Your daughter is ripe for the picking.’
She quickly replies: ‘And your balls are ripe for a kicking.’

The quick-witted, sharp-tongued Mother Courage emerges as a product of her times, but as each character responds in their own way, we’re left questioning the moral choices they face. Rose Ayling-Ellis is heart-breaking as her sensitive, mute daughter, Kattrin, while Hedydd Dylan offers an equally heart-wrenching glimpse of female desperation as wild-eyed, prostitute, Yvette. The men too are complexly drawn. Simeon Blake-Hall and Conor Glean display both young naivety and vigour as her two sons Swiss Cheese and Eilif; Kevin McMonagle’s minister is both cowardly and brave, while Guy Rhys is an instantly recognisable charmer as wide-boy chef.

These characters draw us into their dystopian world and in them we see a dark reflection of our own. It is a thought-provoking evening that shines a light on greed and profit to make Brecht’s 1941 play as relevant and provocative as it ever was.