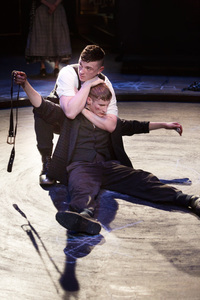 The emerging urban gang culture of Victorian Manchester is a gift for dramatists who are only really beginning to scratch the surface of these complex and fractured lives.

Last year, HOME staged the immersive and challenging, Angel Meadow, on the site in Ancoats of the notorious 19th century slum area of the same name. In another new play, this time for the Royal Exchange, Scuttlers picks up a similar theme. It takes its title from the name given to the gangs of youths, both boys and girls, who terrorised the streets of Ancoats as an unruly mob, making parts of the city, as a judge described at the time, ‘as unsafe and uncertain as it is amongst a race of savages.’

Here, playwright Rona Munro mixes fact and fiction to portray the long-forgotten teenagers who identified themselves as the Bengal Tigers and fiercely protected their territory by whatever means possible. These are young mill workers, who, when faced with an enforced holiday due to industrial action elsewhere, find themselves with little to do except drink and fight the inhabitants of neighbouring streets with belt buckles, fists and knives.

In addition to the cast, the production also features a 32 strong community ensemble, and director Wils Wilson uses the number of bodies to great effect, creating a real sense of both anarchy and playfulness in the movement. Fly Davis’ design is also impressive, using the brutality of an almost bare stage and a drop down cage of a weavers loom to emphasise the oppressive nature of the working and living conditions in the area. To add to the gloom, the stage is soaked in an obligatory Manchester downpour.

Peter Rice’s soundscape is integral to the atmosphere of the whole piece. And there are decent performances from the young cast, particularly, David Judge, as a likeable and reckless Thomas, and Rona Morison, as the feisty ring leader of the girls, Theresa.

The weak link in it all, unfortunately is the story, which however good the rest of the work around it may be, it cannot make up for. In history, these gang members are faceless youths, depersonalised by society, human rats almost, who kill each other on the streets and no-one cares. And so, neither do we care for them here. In the main, characters are one-dimensional and so can be disposed of without a second thought.

Inspired by the 2011 riots, Munro creates links between today’s gang culture with that of the original Victorian gangs. Yet, I feel that it might have been better to leave the audience to make its own comparisons, because putting contemporary values on a Victorian setting sometimes feels not simply out of place, but jarring.

It is interesting and ambitious dramatically to look at gang culture across generations, and the Exchange is to be applauded for giving life to what has long been an invisible part of the city’s history. In this sense, Scuttlers, while opening more questions than it answers, could well be a front runner for more dramatic period work on urban gang culture in the future.

Scuttlers is at the Royal Exchange, Manchester from 5 February to 7 March 2015.