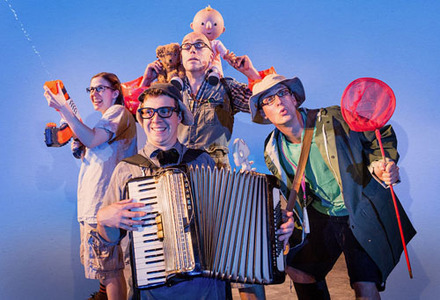 We’re Going On A Bear Hunt

There’s something for everyone at The Lowry this Christmas, and for little ones the show of choice is We’re Going on a Bear Hunt. My two-year-old nephew had spotted the posters, and although it wasn’t a story I was familiar with, he recognised it instantly.

The play is adapted from Michael Rosen’s popular children’s picture book of the same name, which is illustrated by Helen Oxenbury. For those, like me, who don’t already know, it tells of a family of adventurers (dad, brother, sister, baby and dog), who go searching for a bear and keep telling themselves they are not scared, even though they clearly are.

Sally Cookson’s adaptation brings the story to life in a lively and interactive manner that, like the book, leaves plenty of room for the imagination. It is amazing how readily the children suspend belief, as the characters make their way through tall grass, a wide river, a snowstorm, a thick forest and a dark cave. The set design and props may seem a bit Blue Peter at first, with a blue bucket river, painted hand prints for mud, and a cardboard box forest. But the children love it. There is no doubt that these young minds have been transported into the world of the story and there are huge screams when we finally catch sight of the big, growling bear.

A talented and energetic cast of actor musicians play a range of instruments, from the kazoo to the soprano saxophone, and keep the story bouncing along with genuine suspense and piles of fun. The children get to join in shouting and singing. There is no escaping the water pistols, even for those sat at the back, and when the snow falls onto the auditorium, the look on the youngster’s faces is truly magical.

I imagine this story will be just as popular on stage as it is on the page, and if you want to hear it from a little one, my nephew’s verdict: ‘Bear Hunt was great.’