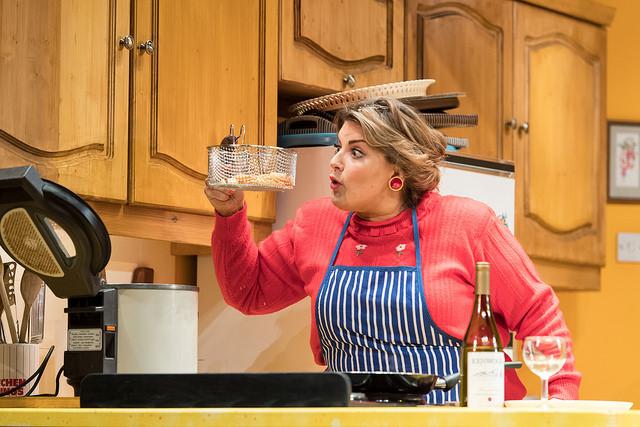 Where did the time go? That’s the central question of Shirley Valentine. For anyone in the audience who remembers the 1980s, it’s a question we’re all asking – not least on hearing Jodie Prenger is in the lead role.

‘She must be playing it younger,’ a friend says to me before the show. Well, a little, but not much. Willie Russell’s Liverpudlian housewife facing a mid-life crisis is 42-years-old. In 1989, when I saw the film, Pauline Collins’ character seemed much older.

Perhaps that’s one thing we recognise in this 30-year anniversary production – being 42-years-old is not always what you imagine it would be.  And also, 80s fashion, particularly a royal blue two-piece, with a wide brimmed white hat, isn’t as flattering as people once thought.

The setting of the play is very much a period piece. We meet Shirley in her pine kitchen, with yellow painted walls, a round-dialled telephone on the wall and a deep fat fryer on the go, cooking the famous egg and chips for her husband’s tea.

Yet as Prenger begins her monologue, the dialogue is fresh, snappy and very funny. Of course, the story is of its time in so far as it’s not uncommon for women to travel alone, and I’m not sure how many men expect their tea waiting for them on the table when they get home from work. Given the same scenario in 2017 perhaps it’s more likely Shirley would have been seduced by smooth words over the internet than in a Greek taverna, but the cultural references are still recognisable and the emotions never change.

The Lowry’s Lyric Theatre is a huge stage for a one-woman show, but Prenger pulls it off wonderfully. She is an incredibly likable performer and her natural warmth is perfect for the role. Whether she’s talking to the wall or a seaside rock, her animated conversation and superb comic timing fill the stage with an energy that is both absorbing and uplifting.