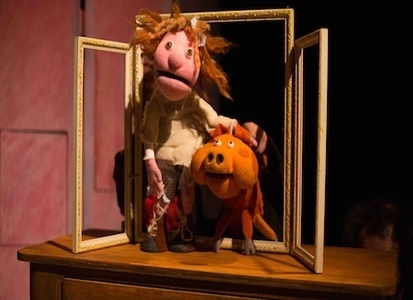 The glimpse of a bare bum on stage is guaranteed to induce a burst of laugher.

And herein lies the enduring appeal of Hans Christian Andersen’s morality fairy tale. It’s cheeky, silly and pokes fun at the pomposity sometimes only an innocent child can expose.

Stuff and Nonsense take this familiar story and breathe their unique creativity into the telling.

Bringing the story into modern day it opens with a woman whose wardrobe is bursting with clothes and she still doesn’t know what to wear. Performers Jenny Harrold and Toby Gascoigne quickly move into the telling the story of an Emperor who loves clothes more than anything and invite the young audience to use their imaginations as they build a palace out of an old wardrobe and town houses out of vanity screens.

The world of the Emperor is inhabited by a range of colourful puppet characters, including a Geordie pig. As well as working the puppets, Harrold and Gascoigne play the scheming fashion designers, Bolshie and Banana who convince the Emperor and his aides that they’ve come up with an amazing new fabric that only clever people can see.

As the story goes along, the pair get into all kinds of scrapes and hang upside down as if these strength tricks take nothing.

Of course, the adults watching all know they do. There’s a huge amount of energy packed into this one-hour show. It all zips along with an infectious silliness that has the children transfixed and, in true slap-stick tradition, has all the family laughing at a flash of a naked puppet’s bum.

The Emperor’s New Clothes from Stuff and Nonsense Theatre Company was at The Lowry on 11 June 2017.