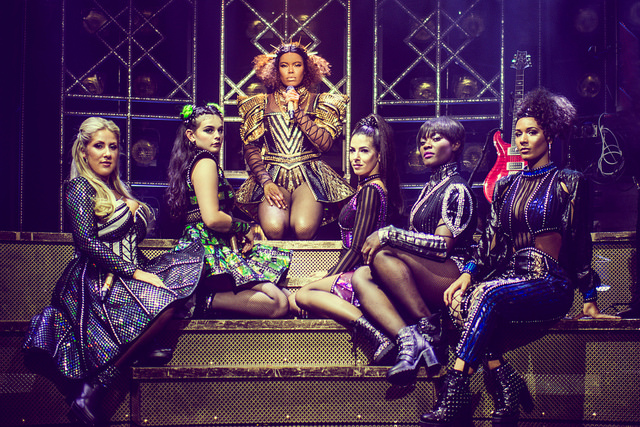 Six the Musical, at The Lowry, Theatre Review

Six the Musical is a histore-mix of the lives of Henry VIII’s six wives, with a 21st century kick – and what a kick it is.

The Tudor King is out of the picture – in Facebook-style he’s ‘unfriended’ them all. And his six Queens have taken the childhood mnemonic for which we know them best as their new anthem. Divorced, beheaded and died, divorced, beheaded, survived, becomes: Divorced, Beheaded, Live. Henry’s six ex-wives are back as a feisty girl-band, with plenty of drama to sing about how they were wronged by their royal man.

The staging is like a concert, with a wall of spotlights and a live all-female band – the Ladies in Waiting – providing musical backing to the singing Queens. Up front and ready to party the royals are dressed in outfits Lady Gaga could be proud of. A jumble of tight Tudor corsets, Alice in Wonderland surrealism and skimpy pop-icon sex-appeal, the costumes scream attitude and these wives have plenty of it.

‘Remember us from your GCSEs?’ We certainly do – but not like this.

The idea came, as many genius thoughts do, when writer, Jamie Armitage was doing something completely unrelated. During a poetry class at Cambridge University his mind wandered off and he wondered what it would be like if Henry VIII’s wives formed a girl band? From that spark he got together with history student, Lucy Moss and the pair of them decided to write a musical and take it to the Edinburgh Fringe.

There are clear influences from Hamilton to Horrible Histories, but remarkably it is unlike anything that’s gone before. If you remember seeing the Spice Girls first shoot to fame with Wannabe, watching Six gives a similar feeling – you’re not quite sure what you’re seeing, but it’s fresh, full of energy and makes you smile. It’s also playfully edgy in pushing today’s tight boundaries of political correctness.

After a scene-setting Ex-Wives, each of the Queens sings a solo, X-Factor style, battling it out for who had the most torrid time with Henry – ‘What’s more painful than heartache? A severed head’.

It’s an eclectic mix of musical styles, largely high-energy Euro-pop mashed with Hip Hop, and house music, soulful ballads and a bit of Calypso thrown in along with a souped-up Greensleeves and updated lute playing.

The Queens are witty, sassy and bursting with attitude. At 75-minutes straight through, it’s a great party starter.
★ ★ ★ ★ ★

Six is at The Lowry, Salford Quays from 4-16 December 2018. See website for full tour details.