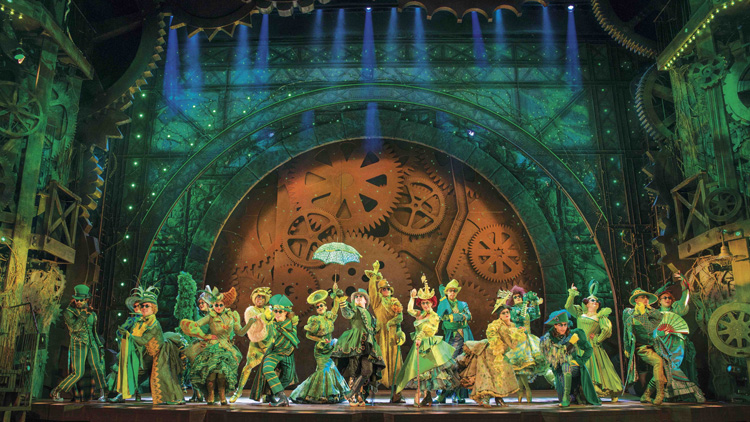 After 15 years at the top of its game, Wicked can no longer simply be thought of as a quirky off-shoot of the Wizard of Oz.

It’s fair to say that if you’re a fan of Frank Baum’s original tale, you’ll get much more from this re-imagining of the story’s characters. But I’m equally sure Wicked has gained a whole new audience of its own, probably bringing as many new viewers to the 1939 film as it is gaining from it.

Covering a time before, during and after Dorothy stepped onto the famous Yellow Brick Road, Wicked tells the story two young girls who grew up to become Glinda the Good and the Wicked Witch of the West. We find out how the Cowardly Lion lost his courage, the Tin Man’s heart hardened, and why Scarecrow never had much of a brain to begin with. And perhaps the biggest revelation of them all – how the Wicked Witch, Elphaba, when looked at from a different perspective, isn’t quite so wicked after all.

It’s both delightfully complex and simple at the same time. At its heart is a story of friendship and dreams. It shows us in life, people and things aren’t always what they seem. You don’t have to be the perfect popular kid in school for someone to fall in love with you – you can even be beautiful and green. Is it any wonder teenagers go wild for this story?

Eugene Lee’s dramatic sets and Susan Hilferty’s sumptuous costumes, bring the Emerald city gloriously to life in all its vibrant eccentricity and technicolor. Defying Gravity, where Elphaba flys for the first time, is one of the most spectacular ends to a first act you will ever see.

The touring show premiered at the Palace Theatre in Manchester 10 years later. Now five years, five countries, 27,000 miles and 2.2 million theatregoers later, the tour is back where it started, for a final Christmas run in fitting ‘no place like home’ style.

For those who saw the tour on previous visits to the city, expect the same big-budget, blockbuster of a stage-show with some cast changes along the way. Amy Ross and Helen Woolf are both excellent in their roles as Elphaba and Glinda, and most importantly work well together, creating that elusive spark of stage-chemistry to pull the audience into the emotion of their friendship.

For those who haven’t yet seen the show – there is a strong reason why this show is the fifth longest running musical in the West End, up there with the likes of Les Misérables, Phantom of the Opera, Mamma Mia! and The Lion King. it has the combined wow factor of story, score and sets that keeps people coming back time after time.

I am one of those theatre-goers who keeps coming back. I’ve seen it several times on tour and in the West End, and this Christmas run is every inch as wicked.