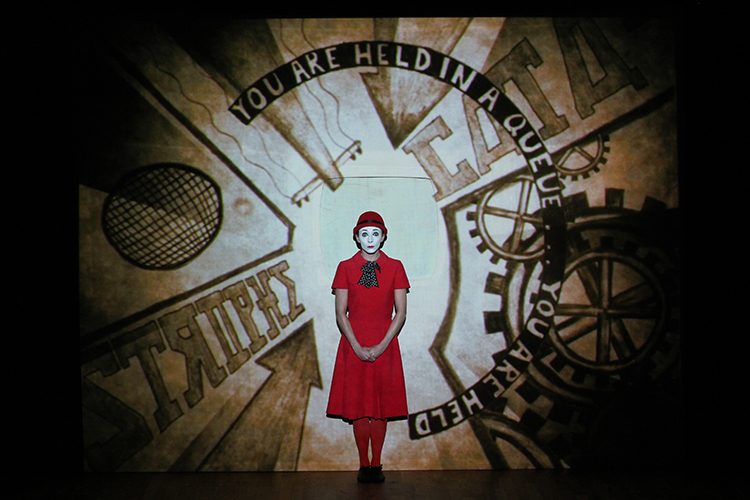 The Animals And Children Took to the Streets at HOME Manchester, Theatre Review

Following a successful run with Golem in 2015, the award-winning 1927 return to HOME as an Associate Company with another darkly comic, surreal take on the modern world.

First seen in 2010, ‘The Animals and Children Took to the Streets’ still feels wonderfully innovative, fresh and socially relevant. Few companies have embraced multi-media as fully. Here performers interact with animated characters; scenes are set by Paul Barritt’s film and animation as if bringing to life the pages of a vivid graphic novel; characters appear as mime artists, with white painted faces, while another actor’s recorded voice narrates their thoughts; and it is all accompanied by Lillian Henley’s vaudeville style piano and song.

The focus of this quirky, silent movie-esque world is Bayou, a run-down area on the outskirts of town that even its most long-standing residents admit is a ‘s**t hole.’ Why don’t they move? Well, the moto here is ‘live in the Bayou, die in the Bayou.’ But is it true?

Three performers – Felicity Sparks, Genevieve Dunne and Rowena Lennon –take on a variety of roles alongside both colourfully animated and shadowy figures, making up the residents of the community’s Bayou Mansions.

What sounds a grand address is a hellish, grey tenement block crawling with cockroaches. And these hardy creatures are not the worst of life living inside its concrete walls.

Bayou Mansions is home to various criminals, perverts, and Wayne the racist with his eight racist children who seems to terrorise anyone, regardless of race, who is not part of his clan.

Into this unsavoury mix arrives the gentle Agnes Eaves and her daughter, Evie Eaves. But when she knocks on neighbour’s doors she gets no answer. The wolf is never far from the door here, hence the common past-time of peeping through curtains and listening through walls.

Some residents dream of escaping but, even when they do venture out, the world is an unfathomable place. Welcome to the age of process and no common sense – where the loneliest man in the world can’t enjoy his free cinema voucher because the small print says the voucher is for two.

A world where it costs 7 years savings to make a spontaneous rail journey, i.e. without a 14-day advanced fare. Helplines that are an endless loop of automated bots and recorded music. Solicitors who literally take blood for their advice; and hospitals where doctors are replaced by St John’s Ambulance volunteers and Girl Guides.

oDIt is a world we both laugh at an abhor, and yet, just as we can read the jumbled, back-to-front letters in Bayou’s signage, we can also see the razor-sharp comment on our own society. And this is where these painted clowns hit us hard.

In bringing to life the Bayou, 1927 has created a fantastical world that quickly draws us in, and strangely leaves us questioning our own society in a depth realism would find hard to penetrate.