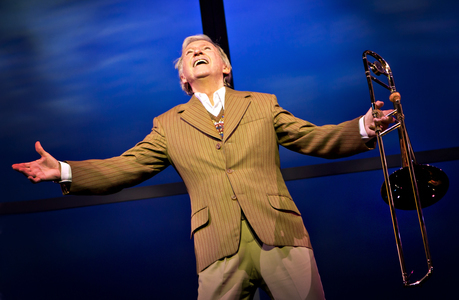 You don’t need to be a child of the 40s to know the music of the Glenn Miller orchestra. You might not be aware that Miller won the first ever gold disc for Chattanooga Choo Choo and went on to win another 30 more, but you will associate his music with the sound of the Second World War, a time when he became the most popular recording artist in the world.

Tommy Steele similarly needs no introduction. He’s the boy from Bermondsey with the infectious smile who grew to be Britain’s first rock ‘n’ roll star. For many years now he has worked in musical theatre and in 2005 was honoured by the London Palladium for the most headlining performances, having racked-up more than 1700 at the time.

You might think ‘what could go wrong with this pairing’? The answer is simple. Tommy Steele is now 78 years old and Glenn Miller boarded a plane which disappeared over the English Channel when he was 40 years old. Granted, Steele is in fine form for his age, but it would be a mean feat for anyone to pull this off, particularly when for this life story he is paired with the beautiful Sarah Soetaert as Helen, the girl Miller met in his college years who became his wife.

Steele admits in the programme that he didn’t feel he was the right man for the role, but was talked into it by theatre impresario, Bill Kenwright. It’s not immediately clear if Steele is playing the role as a ghost from his memory, but either way what we are left with is a man playing romantically opposite a woman who is more than 50 years his junior – for me, this doesn’t work.

Had the show been devised in a concert-style where Steele narrated Miller’s life, it could have worked famously. He could have still played the trombone, led the band and sang whatever songs he wanted to.

Steele’s voice is not what it once was, but he is nimble on his feet and has all the energy and sparkle to still woo a crowd. When he does the encore in this style, you really see him come to life – he is having a ball. Music and dance is in his bones, he loves being on stage and the audience loves him.

Aside from Steele the live 16-piece authentic Glenn Miller orchestra is wonderful both to listen to and to watch perform on the stage; the young dancers keep the energy high, and Sarah Soehaert has a strong voice with a rich clarity to her singing.

There were big cheers for Steele as he entered the stage and on his final curtain call. He has a strong fan base for sure, but I’m not convinced that this production gives Miller, Steele or their fans the show they deserve.

The Glenn Miller Story is at the Palace Theatre, Manchester from 2-7 November, 2015.