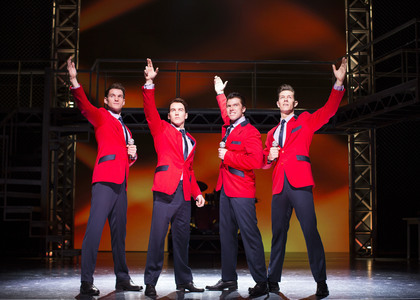 The pile of trophies stacking up for Jersey Boys says it all – 57 major awards at the last count. To be fair, I’m not sure if there is anything left for it to win. This panel awarded the UK tour the MTA Brynteg award for best musical at last year’s awards. After that sell-out run it returns to Manchester for two weeks, with a different front man than I saw last time, but the rest of the Four Seasons stay the same, and the production is still in every sense as good as the hype suggests.

The show features the hits of Frankie Valli and the Four Seasons and there are lots of them – Beggin’, Sherry, Walk Like A Man, December, 1963 (Oh What a Night), Big Girls Don’t Cry, My Eyes Adored You, Let’s Hang On (To What We’ve Got), Bye Bye Baby, Can’t Take My Eyes Off You, Working My Way Back to You, Fallen Angel, Rag Doll and Who Loves You, being just a few – but, this is no jukebox musical. Rather the songs are carefully crafted around an intelligent, witty, and often moving script that gives the back story to how four boys made it from the streets of New Jersey to the Rock ‘n’ Roll Hall of Fame.

Matt Corner takes on the role of Valli with all the confidence and charm of a real superstar. His voice is sensational and at one point audience members stand up to cheer in the middle of the show. Touching his heart, Corner is clearly moved at the level of applause – the atmosphere is electric, it feels like we’re at a concert. The rest of the guys and the orchestra have a large part to play in achieving that response too.

It’s not a one-man show by any means. We get to hear the story of the group from the perspective of each of the four members: Stephen Webb is brilliantly cast as jack-the-lad Tommy DeVito, Sam Ferriday is the talented and sensible song-writer, Bob Gaudio, while the towering Lewis Griffiths is far more than the Ringo of the band, as his character Nick Massi suggests.

The show was every inch worthy of the spontaneous standing ovation it received on opening night. The audience loved it, and I’m sure, like me, many will go back again.

Jersey Boys is at the Opera House, Manchester from 27 October to 7 November 2015.