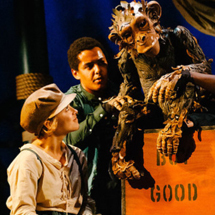 Anyone who ever visited Hartlepool will know the tale of the Hartlepool Monkey.

Legend has it, during the Napoleonic Wars of the early nineteenth century, a French ship got caught up in a storm off the north-eastern coastal town. The ship’s mascot, a monkey, was the only one to survive the wreckage. The people of the town had never seen a monkey before or a French man. Mistaking its oobedo for a foreign language, they put the animal on trial, convicted him of being a French spy and hanged him on the beach.

How is hanging a monkey pertinent to our times? As Gyre & Gimble’s new production shows us, more than we may think.

Given the same circumstances, how many of us would do the same? In 2017, we may not be hanging monkeys on the beach, but when it comes to fear of the unknown, how much has human nature changed in the last 200 years?

It is a parable for our times. Ordinary people poor and hungry, struggling to make a living, while the people in power live off their good will and squander the town’s funds. As the town’s quack doctor telling confides, we are ‘using unwelcome strangers to divert from our problem’.

Writer, Carl Grose adds a side-story of a young girl washed ashore with the monkey. She’s befriended and protected by a young boy who doesn’t have the same learned fears of the adults around him.

The story is beautifully told by a strong ensemble cast, using a mix of myth and music. There is one basic set which converts swiftly from the deck of a ship, to the local ale house, beach and the town. Centre stage of course is the cute chimpanzee, amazing puppetry from Gyre & Gimble, the original puppeteers on War Horse.

It’s an entertaining hour-and-a-half, that will keep you thinking for much longer.

The Hartlepool Monkey is at The Lowry from 3-4 November 2017.