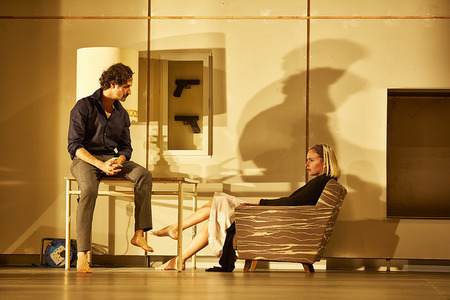 Hedda Gabler is a gift of a part that can be played by a star name or make one of the actor playing her.

The last time I saw it staged, Amanda Donohoe was Ibsen’s anti-heroine in Braham Murray’s production at The Royal Exchange.

I remember the attraction of seeing a big name in such an intimate setting and there was royalty in the audience – a relatively newly-wed, Prince Edward. In many ways I was aware I was watching a famous actor play a great part.

In comparison, Lizzy Watts is not a household name, although judging by this controlled performance I imagine she may become one. In a play about freedom, Watts freedom from the expectations of celebrity allows her to embody the role in a way that makes it memorable for being genuinely disturbing. And the unsettling nature of Ivo van Hove’s modern dress production is that Hedda, in all her delusion, is uncomfortably real.

Patrick Marber’s version draws attention to the dark comedy of the piece and brings us a Hedda for the 21st century, who still has the power to beguile and shock in equal measure.

Alongside debates about gun laws, relationship breakdown and constant need for entertainment, the story of Hedda Gabler takes on a new significance. The play opens with Hedda slumped over a piano while Tesman (Abhin Galeya), her academic bore of a husband, drones on about how he, of all the men dazzled by her beauty, won Hedda as his wife. For all his so-called intelligence, Tesman is as vacuous as the rest.

As the title suggests, Hedda, who still carries her maiden name, is not a woman to be owned. Fresh from a six-month honeymoon, the couple’s relationship is already in trouble. Deeply unhappy and bored to the level where she never gets dressed for the whole play, Hedda finds amusement in wreaking havoc on the lives of those around her. And in some ways she meets her subversive match in Brack (Adam Best), whose destructive influence is displayed coarsely with violence and sexual dominance.

The action takes place in Jan Versweyveld’s cavernous bare-walled set that takes up the expanse of the Lowry’s Lyric Theatre stage. Sometimes it feels the performers are rattling around, but perhaps that is intentional, as if the other characters are merely pawns in Hedda’s game.

The sparseness of Hedda and Tesman’s supposed dream home, focuses attention on two hand guns kept in a glass cabinet on the wall. These, and the ominous background beating of a drum, tell us from the start this could end badly. Hedda may declare she wants to be ‘free from all ugliness,’ but things about to get very ugly indeed.