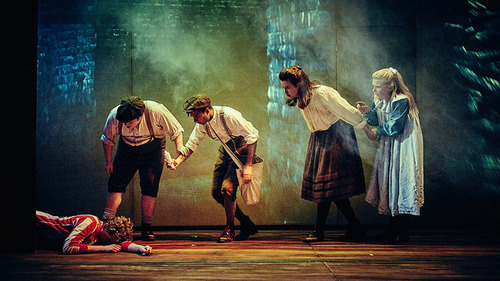 When Edith Nesbit was four-years-old her father died suddenly, ending the idyllic security of her childhood. In many ways, The Railway Children is the story of her life as she would like it to have worked out.

Written at the turn of the 20th century, it depicts a world that to adults appears to be one of innocence and charm. Yet, for children it’s easy to forget there is still the very real tension of a father missing, a mother sick, children injured and life turned upside down by circumstance and poverty. Giving children a means to change this, even in today’s world of ipads and X-boxes, is both exciting and empowering.

Dave Simpson’s adaptation captures these enduring qualities of adventure for a young audience, while running through a constant stream of gentle humour and nostalgia to keep parents entertained.

In many ways, it is a complicated story to stage with fast moving trains and trees falling on the line. This new production from Exeter Northcott Theatre gets around this by using a mix of traditional staging, printed backdrops and projections. The result is a genuine feeling of depth to the stage, particularly the scenes in Three Chimney’s Cottage, with its white picket fence, separating it from a railway line and acres of fields.

While projections are often used to depict the Yorkshire station and the speed of the trains, the overall impact is not one of realism. This is very much a children’s show and designer Timothy Bird invites the audience to use their imagination to create the landscape by mixing in models to the perspective of an already busy stage.

Finding adult actors who can capture the openness of children is often a challenge, but one that all four actors – Katherine Carlton, Millie Turner, Vinay Lad (in a fine professional debut) and Callum Goulden – pull-off with seeming ease.

Steward Wright holds the story together with great warmth as the kindly, station master and narrator, Perks. It is a warmth that spills out across this whole production and earns it a spontaneous cheer as the Railway children, with their out of place accents, jam butties and community spirit, make everything right in the end.