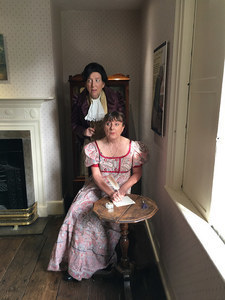 MTA first reviewed this production from Manchester comedy duo, LipService when it premiered at Oldham Coliseum in January. I missed it that time around, so was delighted to catch it at the Lowry, where Maggie Fox and Sue Ryding kick off their autumn tour.

It’s clear from the audience, I’m far from alone in looking forward to the next instalment from this wacky pair, who’ve made a career of parodying literary favourites.

If you’re thinking, that sounds a little high-brow for me, don’t let that put you off – it really isn’t. It’s clever, well observed humour, that’s also gloriously silly, with plenty of visual and physical comedy, and as many popular cultural references as there are literary ones. Remember Colin Firth emerging from the lake as Mr Darcy? Thought so.

LipService choose well-known classics, like Pride and Prejudice and Rebecca, which have seen umpteen adaptations across several mediums, and manage to inject something left-field, getting us to look at what have become solid parts of our cultural heritage afresh, with plenty of laughs along the way.

The title itself explains the show. It opens with Sue getting down to writing, only to be interrupted by her dad, asking if she’ll go shopping or explain how to work his ipad. Going into a day-dream about how female writers from previous generations were distracted from their craft, the action moves to Jane Austen whose distraction leaves Mr Darcy dangling. And so, he goes looking for other famous women writers in search of a plot, encountering Daphne du Maurier, Beatrix Potter and Elizabeth Gaskell on his travels.

The sketches are skilfully intertwined. Large, beautifully quilted screens (produced from quilters groups across the country) are used to shield quick fire changes, as well as add to the general Play School feel of piece. Although the set appears simple, the pair cleverly intertwine video, puppetry and a whole series of costume changes to create numerous characters, including an overloaded internet cloud with no end of secrets.

Part of its joy is making you think about the creative process in a playful way – what if Beatrix Potter has called her famous rabbit, Philip? Another large part is seeing two talented performers whose friendship began as drama students at Bristol University, and whose genuine warmth and rapport is the secret of all great comedy partnerships.

In all, it’s a playful, feel-good show that has the audience laughing out-loud from start to finish.